I skipped one! Yes, a big thanks to Nic Kramer, who pointed out in the comments that I had skipped Mickey’s Steamroller, an earlier short in 1934. I started watching and then promptly forgot about it when I was summoned away. With all due apologies, let’s take a look at Mickey’s Steamroller before we finish up the 1934 shorts. 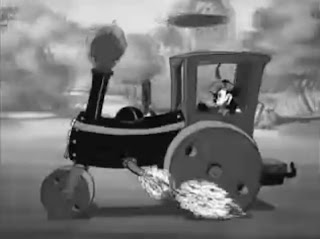 This one is mainly notable for the full introduction of Mickey’s nephews, Morty and Ferdy. Although they are not referred to as such here, they would go on to be famous in comic books and some shorts. It’s interesting that Mickey’s nephews were never as big as Donald’s famous trio of Huey, Dewey and Louie. But they were fun characters. 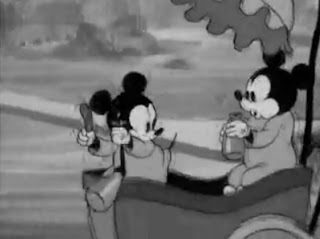 The mischievous duo is out for a stroll with Minnie pushing the carriage, when they run across Uncle Mickey in his steamroller. The two kids are being kids – beating each other up, stealing things from each other, etc. – but seeing the steamroller brings them together in awe.

Mickey gets distracted by Minnie, of course. It’s a very cute distraction, as he offers her some candy, which turns out to be conversation hearts. When Minnie reads the one that says “Kiss Me” out loud, it results in a chase around the parked steamroller that leaves it unattended. 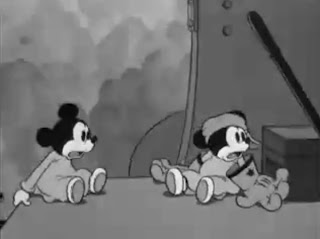 Morty and Ferdy take advantage and start a rampage with the steamroller. This is where the short shines. Morty and Ferdy’s interactions with the steamroller are the best part of the short. We have the twins being shot up in the air by the whistle, then sucked down through the smoke stack. The firelings make a return to menace them, and there’s even a moment when they burn the rope that Mickey has lassoed them with. This is a fun sequence, even if a little destructive.

Mickey is a fervent pursuer, though. He lassoes the steamroller and gets sucked along, taking lampposts with him in a great gag. He ties the rope to one lamppost, but it does not hold, and sucks each successive lamppost down and out onto the street with it. 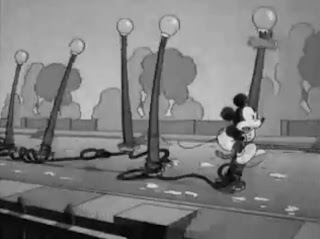 The ending features the steamroller turning the tables on Mickey, before everyone crashes into a building. Rather than being upset with his nephews, though, Mickey just smiles at them. What? These kids destroyed half of the city, and leveled a building, dragging him through the streets. It’s an odd way to end the short. 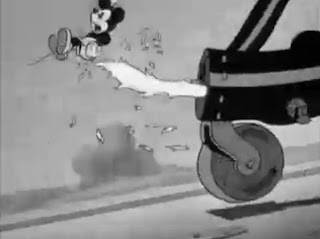 The whole thing seems a little disjointed. There are good gags in the middle section when the boys have the steamroller, but the rest is pretty mediocre. I was hoping when I saw Morty and Ferdy that there would be a bit more to do with them, but alas, they disappear for a while after this.