Now, this is what I’m talking about! The Dognapper is a short full of action, adventure, gags and classic characters. Watching it, I got that “Disney” feeling inside, of wanting to go to the parks, or cuddle up by a fire and watch a marathon of shorts. This is what Disney animation is all about. 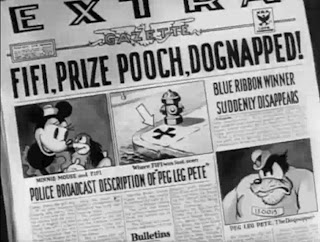 What makes it so great? It’s all the things I listed above. First of all, it’s full of great action. The short opens with a shot of a newspaper outlining the plot: Pete has dognapped Fifi from Minnie, and the police are hot on his trail. That’s all the set up you need, as Pete goes zooming by policemen Mickey and Donald, and the chase is on.

This short jumps right into things, and it’s the better for it. And pairing Mickey with Donald is a bit of inspired genius. The contrast between them – Mickey the dashing hero and Donald the coward – is classic, and continues to this day. As they chase Pete all around the countryside, there are great gags, like Pete knocking out the bridge and Mickey and Donald stretching their motorcycle and sidecar to ride the rails.

They finally corner Pete in a sawmill, by driving up a log and crashing through the side. We get the classic silhouette of the characters in the hole they leave behind, which is another fun gag. The sawmill sets up all kinds of opportunities for fun as well. 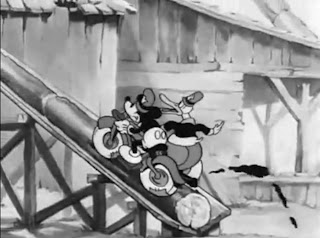 Throughout the sawmill, Mickey and Donald chase Pete, but they constantly get in each other’s way. One will have a gun trained on Pete only to have the other crash into him and ruin it. They get trapped in a ladder while Pete chases them, which makes for more great visuals. 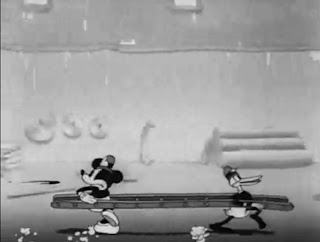 The final scenes feature some great work, as Pete turns a saw on too high, and it breaks loose and chases the three of them around the building. This is high energy, frenetic animation at its best, as good as anything produced at Warner Bros. The action never stops, as the saw blade goes from Pete to Mickey to Donald without pause. 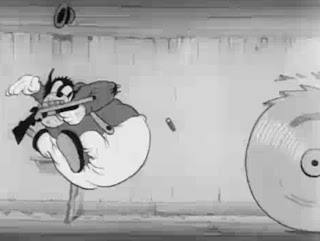 Finally, Mickey and Donald are able to corral Pete, when his peg leg gets trapped on the saw blade, and they throw a corset over him. It’s a funny way to end this short, which is funny throughout, but deals with a “serious” subject. 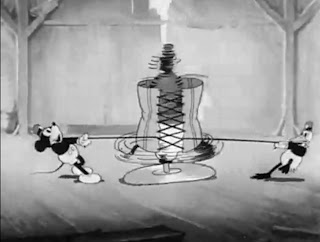 The Dognapper may be my favorite short so far. Yes, it’s that good. I am a huge Donald Duck fan, so it doesn’t hurt that he is in this one. But the tone, the action and the style of this short remind me of later buddy shorts like Lonesome Ghosts, which is also one of my favorites. You’ve got to see this one, as I think it’s one of the lost treasures of the Disney shorts.