Sticking with yesterday’s theme in Camping Out, the next Mickey Mouse short, Playful Pluto, is really a gag fest. But this takes it a step further, in that the short does not feature a real story, but instead runs from scene to scene using Pluto’s antics as the continuous thread. It’s a different way to do things, but an effective one.

Long time readers know that I prefer good, solid storytelling in my cartoons (and in any other medium). However, Playful Pluto is designed to show you snippets of a day in the life of our favorite cartoon dog. It’s more of a gag-filled pastoral than a plot driven action scene. That’s what makes it work so well.

The short opens with Mickey and Pluto out in the yard, raking the leaves. Since this is something I used to do in my yard with my dog, it was a great shot for me. Of course, Pluto has to jump in the leaves, and spread things all over, causing chaos. 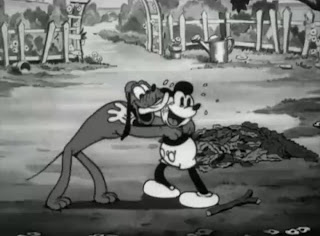 From there we get a variety of scenarios. Mickey turns on a hose and Pluto attacks it. But he tears the hose and Mickey has to go to the basement to turn off the water. Pluto is holding a flashlight in the basement and swallows it. This causes him to run upstairs and burst through the screen door. 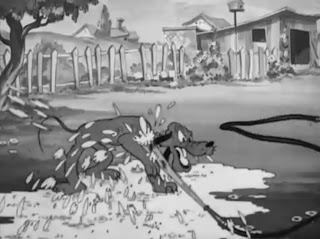 Pluto then ends up in a set of drawers, then is plagued by flies that come in through the hole on the screen door, before finally getting caught up in fly paper that Mickey put down to trap the flies. 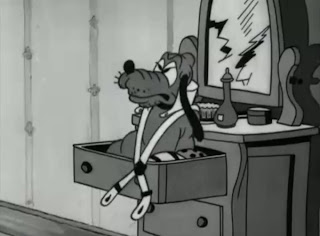 As you can see, there’s no coherence or plot to the short, but it still works. It’s the kind of random, one after the next kind of thing you would expect from a dog. The title is really apt – Playful Pluto. This short is all about Pluto, and what he does day to day.

A tip of the hat to the animators on this short, because the key to this is selling Pluto’s emotions. Making a playful dog the lead character could have been difficult, since he is not pretending to be human or anything of the sort. But the animation conveys his frustration, anger or happiness with ease, making it easier for the viewer to connect to him. 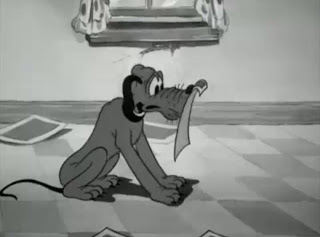 I imagine that this short is what convinced Walt that Pluto had a viable road ahead as a solo cartoon star. Mickey is in the short, but he’s rarely the central character. Pluto carries the action. 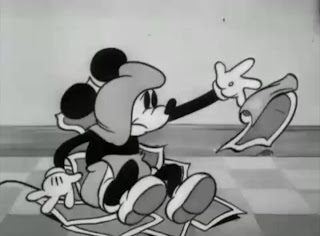 The gags in this are well done, but not so uproarious that they are far fetched. Most of this is stuff you can imagine your dog doing. The flashlight gag is out there (Pluto swallows a flashlight then hiccups and his body illuminates), but the rest are pretty normal. A dog that jumps in leaves, runs through screen doors and does the rest of the stuff in this short is realistic, which makes it that much funnier.