Shanghaied is a good old fashioned adventure story, with Mickey Mouse playing the role of the swashbuckler. If you recall, in his first adventures, this was Mickey’s style, such as in The Gallopin’ Gaucho, and he returns to it here, as an adventurer on the high seas.

This is the first Disney short I can remember that begins in media res, or in the middle of things. It’s a popular storytelling device today, beginning the action of a TV show or movie and explaining how we got there along the way. In this short, we begin with Mickey and Minnie as Pete’s captives on a pirate ship, without explanation of how they got there. 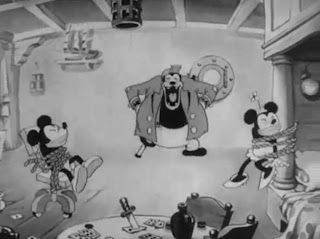 This is a significant change for Disney. In all of the shorts until this one, lots of time and effort has been spent on exposition. Think about it. We often get to see Mickey in his routine or everyday life at the beginning of a short, or we see him walking up to the door of Minnie’s house or other locations. This is the first time we’re thrown in the deep end of the pool and told to keep going.

It works, though, as we are instantly aware that Pete is bad news and he wants to do harm to Mickey and Minnie. Mickey’s escape features some great gags, such as Pete being knocked over and having a rolling chair’s bottom attached to his peg leg. That makes for some funny moments when Mickey and Pete are swordfighting. 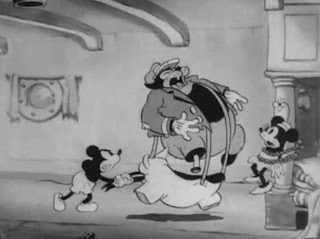 Seeing Mickey as the swordfighter is a great treat. We see the main mouse at the peak of his powers. It’s fun to see Mickey in charge of the situation, even when his swordfish falls apart and he is unable to continue the swordfight. 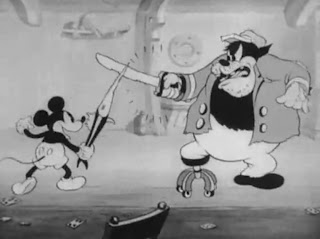 The action continues out on the deck of the ship, where a contingent of identical pirates swarm after Mickey and Minnie. Much like the stable boys in The Steeple Chase, these pirates are the generic bad guys that will later become the Beagle Boys of the Duck comics and cartoons. It’s interesting to see them used here first. 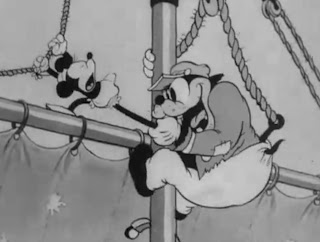 Mickey forces the pirates back with a variety of gags, including launching pots out of a cannon that stick on their heads and heaving a stove at them that the pirates get stuck in. The final gag is reminiscent of Jungle Rhythm, with Mickey launching a harpoon that corrals all the pirates and Pete, sticking them in an arc over the ocean. 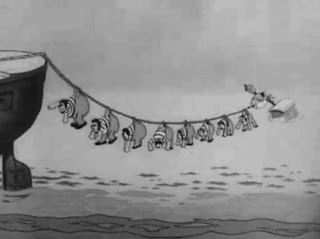 This is one of my favorites so far, just because it is so different than everything else. Starting the action when things are well underway is a good device, and the scenes of the swordfight are hilarious, because of Pete’s roller wheel leg. Shanghaied is an example of Mickey the hero at his peak, and that makes it a great short.