Yesterday, I mourned the end of the trio shorts, where Mickey, Donald and Goofy gathered together to do a job. Fortunately, though, it was not the end of distinct pairings of those characters, as today’s subject – Bill Posters – pairs Donald and Goofy in a similar style of short.

Goofy and Donald are posting advertisements for soup all around what appears to be a medieval town. Of course, things don’t go smoothly, and hilarity ensues. What’s great about the short, though, is seeing these two put through their paces in a way that is logical to their character. That hasn’t always been the case, as I pointed out about Donald in Donald’s Dog Laundry. 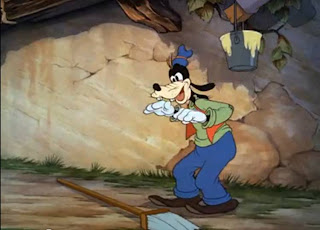 Goofy gets involved in a struggle with an inanimate object, which has been the norm for him. My favorite was the ship’s masthead in Ship Builders, but there’s been furniture, clock gears and more that have vexed the Goof. Here, it’s a windmill that causes the problem. The gags here are pretty clever, if predictable. The windmill “grabs” Goofy’s brush and his glue and even knocks off his trademark hat. 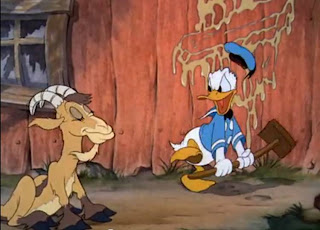 The best thing, though, is Goofy’s confused reaction. When he gets the brush back in his hands, seemingly out of nowhere, he turns to the camera and gives a shrug and a smile. It’s a perfect image for his character. Goofy is always confused, but takes it in stride and moves on. 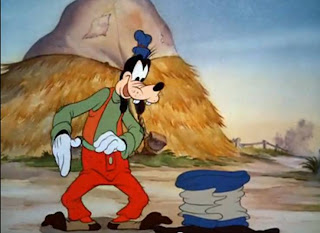 Donald, on the other hand, gets involved with a goat, that is eating everything in sight, including Donald’s posters. We get to see Donald angry and irritated, trying to get his brush and posters back from the goat. But we also get to see a different side of Donald, as the brush gets stuck in the goat’s horns and Donald is cornered against a wall. 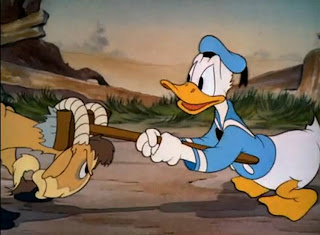 What I loved was that unlike Mickey or another character, Donald is sweating, but doesn’t think for a second that he can’t get out of it. He reaches over, figures out there’s a hole in the wall and shoves the brush handle into the hole before running away. Donald always thinks he knows best, which is often what gets him in trouble. 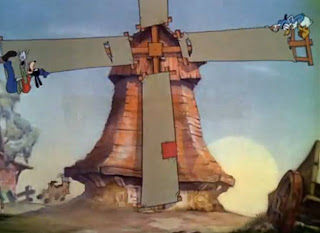 Another fun part of this short is the music. Not so much the score, but the tune that Goofy and Donald are whistling as they come into view and as they work. Yes, it’s “Whistle While You Work,” from Snow White. It’s a fun nod to the film that was such a big part of Disney history.

I enjoy seeing the characters put through their paces on various jobs. Even though it’s a formula that could easily grow old (and some may argue it already had at this point), it’s nice to see characters you love struggling through the work day just like you do.