With Pinocchio out of the way, let’s move on to the other films released by Disney that year. Again, shorts featuring Donald Duck lead the way, with Donald taking a job as The Riveter in this outing. He is matched up with Pete again, as he was towards the end of 1939 in Officer Duck.

This short is, in fact, a very close relative of Building a Building, which in itself was a remake of the Oswald short Sky Scrappers. In those shorts, the hero (Mickey/Oswald) contended with Pete over a woman (Minnie/Sadie), while in this one, Donald is on his own. Still, the crux of the story is Donald, our hero, contending with Pete. 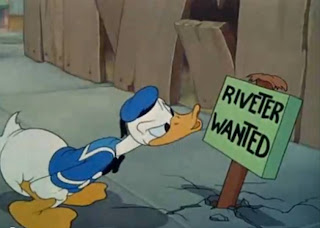 When Donald floats by and sees the job opening for a riveter, he enthusiastically takes the job, but doesn’t know what it means. Remember, this is just as the United States was coming out of the Great Depression, so Donald’s actions probably felt very familiar to a lot of the people watching this short. 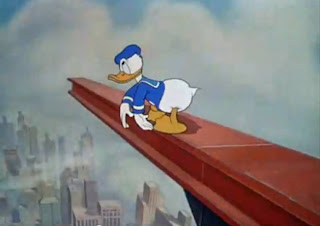 As you might imagine, Donald’s ignorance causes some immediate problems. Pete shows him to the top of the sky scraper that they are building, and Donald gets disoriented, tries to start the rivet gun, then ends up on a rampage through the building while blasting rivets everywhere. The rivet sequence is really well done, and very funny. 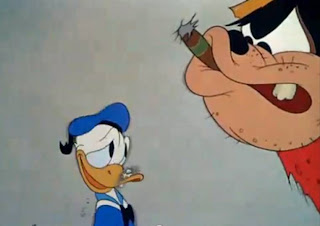 The best gag in the whole short, however, is how Donald ends up becoming unnerved by the sound of the rivet gun. After his sojourn through the building, every time he hears the other workers using their guns, he starts shaking uncontrollably. It’s perfect for Donald, as he is so easily shaken, and when you combine that with Pete wanting Donald to serve him lunch, you get comedic gold. 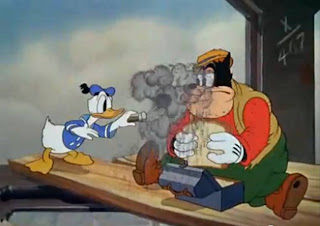 It’s very neat to see Pete back as a foil to the Disney stars, because he is so good at it. The animators manage to make this a manliness contest between Pete and Donald, with both of them repeatedly using the patented cartoon move of picking up their belly, throwing it into their chest and then letting it bounce back down. Watching them try to “man up” to each other makes this one funny. 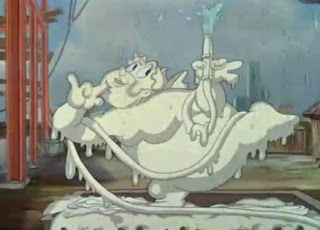 This is also my favorite era of Disney animation just from the visual standpoint. The line work and colors are bright and crisp in this short, as they have been in most of the Donald shorts. We’ll see much the same in the Goofy and Pluto shorts. There was more spontaneity and imagination in the earlier shorts, however. The way Disney shorts work in this era is much like a sitcom, whereas before they were fantasies. It’s an interesting difference, but both have their own merits.

All images copyright Disney. All rights reserved.
Posted by Ryan at 3:31 PM