We haven’t seen our friend Mickey Mouse in quite some time, as most of the focus has been on Donald and Pluto in 1940. That changes with Pluto’s Dream House, which is billed as a Mickey short, but features Pluto in a prominent role as well. It’s a chance for us to get a glimpse of Mickey before his main reappearance in Fantasia. 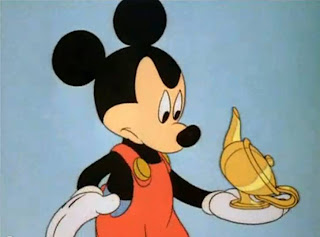 The Pluto rules still apply, here, though, and the canine star takes over the short, as he does in most any short he is in. It’s not that odd, though, since the subject of this short is Pluto and the new dog house that Mickey is building for him. After all, his old drab house, as shown in this short, is looking run down.

The straw that stirs the drink (h/t Reggie Jackson) in this short, though, is a lamp that Pluto digs up when Mickey suggests that they “break ground” on the new dog house. Pluto sprays the lamp up along with other things that are buried in the yard, right into Mickey’s arms. Once Mickey rubs the lamp up, things get interesting.

A Rochester-style voice comes out of the lamp and offers Mickey and Pluto some wishes. In case you don’t know who Rochester is, go check out The Jack Benny Show, but it’s basically a gruff African-American voice. Since Mickey doesn’t want to spend the afternoon working on the dog house, he asks the genie to build it. 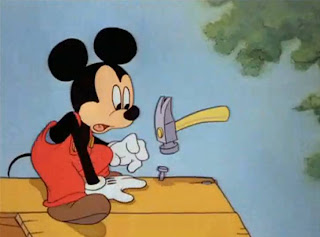 That’s where the gags begin, as the tools and lumber start flying around Mickey and Pluto as the house is being built around them. Lumber flies out from under Mickey, Pluto gets painted as he crouches behind the foundation and soon enough, there is a dream house built and gleaming in front of them. 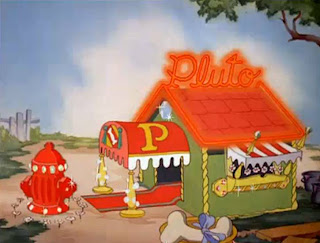 That’s not enough for Mickey, though, who asks the genie then to start bathing Pluto. The magic erupts and drags Pluto into the house to start scrubbing him. It’s an odd scene, because Mickey doesn’t even watch, and just goes in the other room. It’s somewhat strange to me, but still kind of funny. 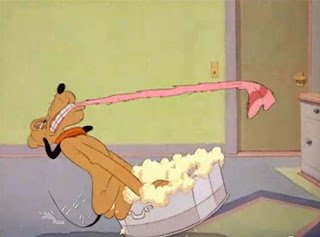 Where it gets even weirder is when Mickey’s radio breaks, and the genie starts taking instructions from the various stations. That’s the funniest part of the short, as the genie starts preparing Pluto in a pie, boxing him, then putting him in a Jell-O mold. It’s rapid fire gags, each one more ridiculous than the next. 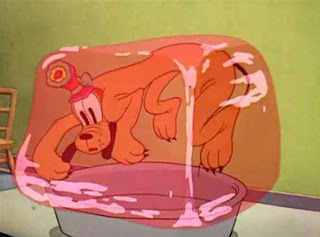 That’s when we get the big reveal that the whole thing was a dream by Pluto, as he jumps up from Mickey’s bedside and into the bed. That actually explains the weirdness of some of the short. The problem with the short is that it’s just a bit off. The early gags move a little slow, then the final ones are so fast. There’s not a continuous flow through the short, and that makes it sort of flat. Don’t get me wrong, it’s funny, but not the best example of Mickey and Pluto together.