Pluto has had his own shorts before (Pluto’s Judgment Day, Mother Pluto, Pluto’s Quinpuplets), but Bone Trouble feels like the start of something bigger. It would be sort of the kickoff to Pluto’s long running series of shorts, and it’s executed so well that you can see why Walt would keep things going with Mickey’s pet. 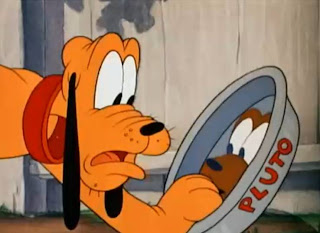 The plot of this is simple – Pluto has no food in his bowl, and heads over to the next door neighbor’s yard to steal a bone. Unfortunately for him, there is a big bulldog there that has dibs on the bone in his bowl. It’s not an original set up, but the payoff to the story is fantastic. 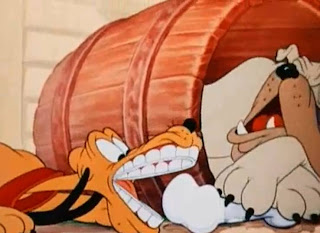 First, a little point of interest – Pluto is not living out in the suburbs with Mickey in this short. Perhaps that is why this feels different. In his past shorts, Pluto has been in the farmlands or in suburbia with Mickey, whereas here, he and his pursuer are running through city streets. It’s a very well done background, as we see details all over the cityscape letting us know that this is a well worn town. 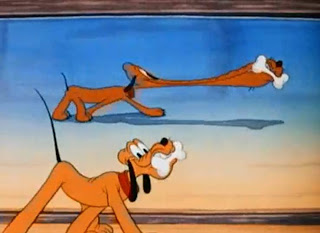 The two dogs end up in a carnival, running through the various rides before ending up in the Hall of Mirrors. Pluto manages to hide there, and gets into one of the best sequences in any of his shorts so far. While walking through the hall, Pluto ends up creating all sorts of funny reflections in the mirrors, which are bizarre, hysterical, inventive and fun all at the same time. 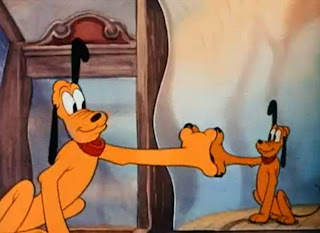 A lot of the work in this sequence reminded me of the Pink Elephants on Parade part of Dumbo. It’s a work we’ll get to soon enough, but the mashing and bending, squashing and stretching of Pluto’s figure in the mirrors hearkens back to earlier days of the Disney shorts, while also looking forward to some of the more psychedelic and free form animation to come in things like Fantasia and Dumbo. 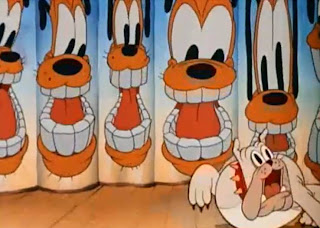 It’s a great sequence that does not end until the bulldog comes up on Pluto, and tries to get his bone back. Even then, though, Pluto manages to outsmart him, by luring him into a room of mirrors and scaring him off at the multiple Plutos hidden there. It’s a bit that shows Pluto at his craftiest, and that’s a side of him we have not seen before.

Bone Trouble is easily my favorite of the Pluto shorts so far, and makes the case for Pluto to continue getting center stage. It’s not surprise to me that Pluto would go on to be a bigger star for Disney after this short.