Donald continues to be the main Disney star of 1940, as he was in 1939. In Mr. Duck Steps Out, though, we in many ways get a flashback to earlier times of Disney shorts, as we see Donald playing off a conceit that many times would have been used for Mickey.

Donald has plans to “step out” and go visit Daisy, who we have not seen for quite some time (I believe since Don Donald, but not 100% sure). Unfortunately for him, Huey, Dewey and Louie decide that they want to get in on the action as well, trailing him out of the house. 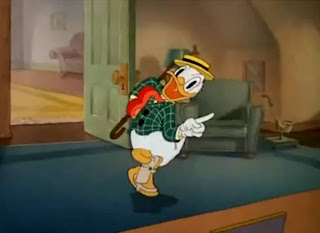 The “Mickey goes to woo Minnie” plot sustained many of Disney’s early shorts, but we have not seen it used for Donald as of yet. It’s an interesting twist on the typical Donald short. This could easily be a Mickey short, with Daisy swapped out for Minnie and the nephews swapped for Pluto. 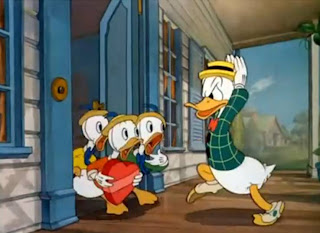 As such, it plays somewhat different than a typical Donald Duck short. It maintains a fun, light hearted tone, but still peppers in some of the frustration that Donald is known for. It’s a delicate balance, but one that is pulled off very well. 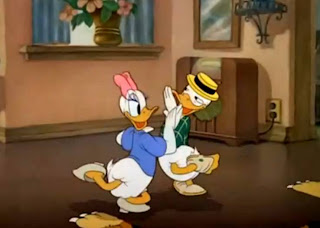 Where I think this short excels is in the flashback to the old, all-singing, all-dancing shorts of the early Mickey days. We’ve never seen Donald in that sort of situation, so watching he and Daisy cut a rug while the boys play music is a fantastic treat. This being Donald, though, there has to be a little twist to it. 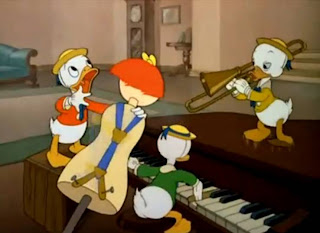 This time, the dancing gets started before the nephews start playing, and they’re not happy about it. So, they resort to trickery, as they are wont to do. The boys put an ear of corn on the stove, then knock it into Donald, causing him to shake violently and spew popcorn everywhere. It’s a hilarious gag that gets funnier and funnier as the short goes along. 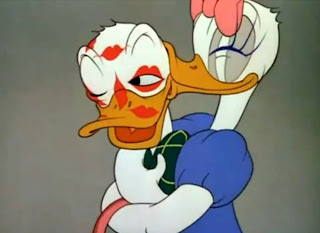 This is very much a throwback to me, but it seems fresh because we have not seen Donald in this role before. Donald’s nephews and Daisy again add to the sense of family that has been around our main duck since almost his first appearance. It definitely seems as though he is building his own supporting cast, and in Mr. Duck Steps Out, it works beautifully.