Bumping this back up, because this post is part of the Disney Blog
Carnival, go there to read more great posts like this.

I’ve often said in this space that Donald represents what most of us are really like – fun loving people who get irritated when things don’t go according to our plan. Even if we all want to be like Mickey, Donald is more what most people act like. That’s why I think Donald’s shorts work best when they involve him in real life situations where everything goes wrong. 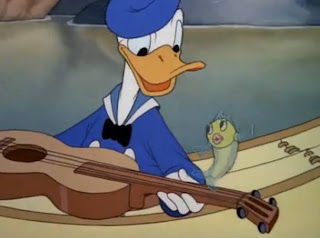 Donald’s Vacation is one of those shorts, and it is great. It features Donald trying to get back to nature by rowing through a forest, setting up a campsite and then trying to relax. Of course, it doesn’t work, because what would the fun be in that?

What I love about this short, though, is that it could have taken the easy way out, and made the whole short about Donald getting his food stolen by chipmunks. It didn’t, though, and the short is that much better for it.

Instead, what we get are four distinct segments, each with different styles and gags. The short starts with a little pastoral piece of Donald cruising down the river in a kayak. This part moves slowly, but has some fun sight gags, like Donald’s legs sticking out from the kayak as he walks over a tree or the fish that gets stuck in his guitar and “swims” out by strumming the guitar. 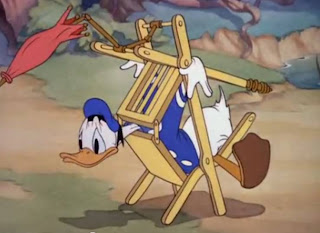 The second bit is Donald’s fight with his folding chair. Anyone who has gone camping or set up a folding chair can probably relate to this one. Donald gets twisted around, caught up in the chair, and hung by an umbrella – all while showcasing his trademark frustration. 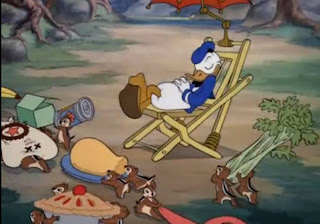 The third piece involves the chipmunks stealing his food. This has to be a precursor to Chip and Dale, as the chipmunks here look nearly identical to Chip, and in the years to come the two chipmunks would become Donald’s enemies. It’s a fantastic bit with some good sight gags of the chipmunks with the food – eating a face into the pumpkin or wearing cupcakes as a dress, for example. 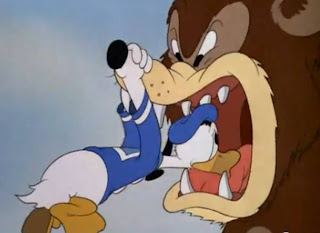 Donald’s encounter with a bear, though, is the coup de grace for this short. It’s classic stuff for a cartoon, with Donald feeling the bear’s face before looking at him, running away and leaving silhouettes in the waterfall as he does, and riding on top of the bear before figuring out that it’s a bear! 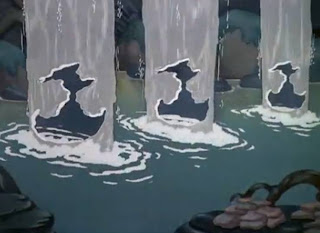 The reason this short works so well is because there is more than just one bit for Donald, and each one demonstrates a different side of him. There’s the fun side to start, the frustration with the chair, the anger during the chipmunk scene and the fear of the bear. This is a great short to get to know Donald, and why he is such an enduring character.