Pinocchio in the Parks

When you’re looking at a company like Disney, it’s hard to not compare the effects of an animated film on the theme parks. After all, if characters are popular, they will endure in the parks, and if they are not (see: Mr. Toad) they will not. Pinocchio is an interesting case study in that regard.

Pinocchio did not have an attraction in the parks for several decades. Disneyland and Walt Disney World did not open with Pinocchio themed attractions. Walt Disney World did have a nod to the film, with the Pinocchio Village Haus restaurant in Fantasyland. Still open to this day, the restaurant is themed to the German look of the film (note: yes, I know the film is set in Italy, but concept designs were German in nature, as were the designs of the restaurants), with paintings on the walls of the characters. Most people remember it for two things: the window on the far left that looks over into It’s A Small World and the Figaro Fries, the fries covered with cheese, bacon, lettuce and tomato. 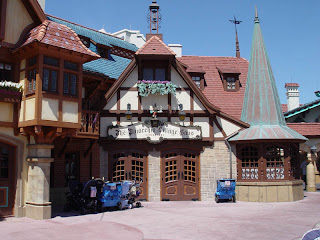 It was not until 1983 that a full Pinocchio attraction made its debut in the Disney parks, coming first to Tokyo Disneyland. The attraction debuted in Disneyland that same year, replacing the Fantasyland Theatre. The new ride took guests in carved vehicles that looked like Geppetto’s creations, through scenes from the film, roughly following the storyline of the movie. 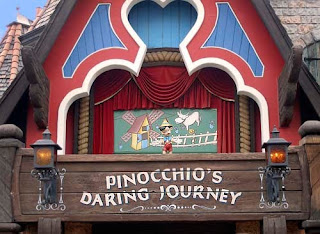 Photo courtesy of All Ears Net

It was and is a fantastic ride, featuring some great scenes, such as Stromboli closing the cage around the guest and the reveal of Pleasure Island from a fun park to a desolate wasteland. Built with updated technology from the original dark rides, Pinocchio’s Daring Journey looks and feels a little newer and fresher when compared to the others.

Pinocchio has also appeared in the parks as a walk around character and especially in parades. For Disneyland’s 50th anniversary, there was a Pinocchio themed float in Walt Disney’s Parade of Dreams, featuring a band of Russian marionettes just like in Stromboli’s show in the film.

Monstro has an interesting career in the parks as well. As part of the Storybook Land Canal Boats, the entrance to the Storybook Land portion sails through Monstro's mouth, entering the area. When there, you'll see Geppetto's house as well. Monstro is also featured in Fantasmic! at both parks, as a projection on the water screens. Those both feature Pinocchio as well, with a puppet appearing, as does Jiminy Cricket on one of the water screen segments. 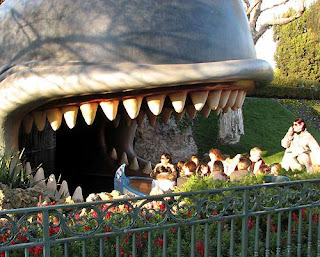 Photo courtesy of All Ears Net.

But the most “visible” presence in the parks is Jiminy Cricket. I put visible in quotes because many times, Jiminy has been an audio presence as much as a video. Back in the olden days of Disneyland, Jiminy narrated a record introducing people to the park, and was featured on the Bell telephones in the old Circlevision building.

These days, Jiminy is featured as the narrator for both Wishes and SpectroMagic in the Magic Kingdom at Walt Disney World. It’s Jiminy’s narration that carries Wishes, and he makes a brief appearance at the end of SpectroMagic to cap the parade.

Of course, “When You Wish Upon A Star” is also featured at the parks. It plays around the castles at both domestic parks, as well as versions of it in other areas, like Cinderella’s Golden Carousel, audio loops in Fantasyland and a few other places.

All in all, it seems that Pinocchio has had a long ranging effect on the parks, and the characters are still popular today. Much the same can be said for Snow White. As we’ll see when we get into the next set of films, that doesn’t always happen.