Donald has had many adventures so far in the shorts, most of them involving his playing off another character, such as Gus Goose, the nephews or Pluto. That continues with Donald’s Dog Laundry, a short that features Donald and Pluto teaming up once more. 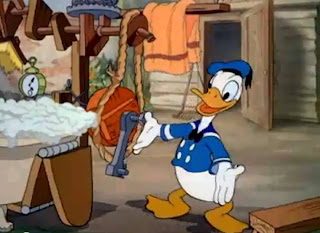 The premise of this short is that Donald has built a Rube Goldberg type contraption that will allow him to open a business washing dogs. Of course he has to test it out first, and Pluto is the nearby subject. The trick, though, is getting Pluto to take a bath, which is difficult, as anyone who has had a dog can attest. 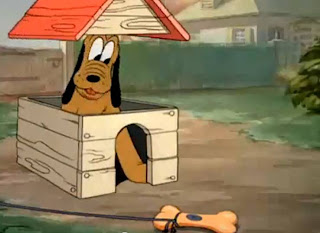 The difference in this short and other Donald shorts is that we don’t get to see Donald get irritated and upset. That is the core of the character, of course, and not seeing it to full effect in this short makes this more of a Pluto vehicle than a Donald short. 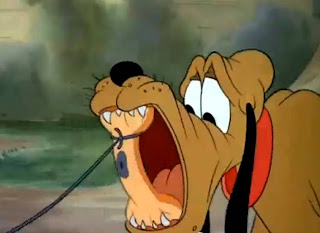 Pluto does get the majority of screen time in this short, keeping up the old rule that any short he is in will immediately get taken over by the canine. A majority of the short involves Pluto sleeping/blowing a leaf and then trying to snag a rubber bone that Donald is using to lure him to the tub.

Most of that is interesting, but it’s not funny in the same way that a good Donald tantrum would be. Seeing Donald’s reaction to Pluto and being frustrated in his quest to get the dog in the tub would have been a much funnier bit of business. We get a little bit of it, but not nearly enough. 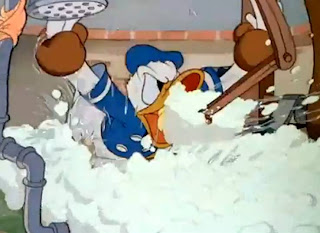 That is not to say that Donald’s Dog Laundry doesn’t have some high points. Watching Donald get attacked by the dog washing contraption is quite funny, and Pluto’s struggle with the rubber bone propping his jaws up is not bad, either. But those moments are fleeting, and the rest of the short seems to unfold at a slower pace, and doesn’t feature as much humor as other Donald shorts.