Once again, we have Donald and Pluto paired up in a short. You would think at this point that Mickey might be getting jealous. I mean, when was the last short that he and Pluto were together in? But no, we continue with Donald and Pluto, as they try to start a boat in Put Put Troubles.

It’s not the most inspired short I’ve ever seen, just to be up front. There are basically two stories here – Pluto getting stuck with a spring coil on the beach and Donald trying to start the outboard motor on his boat. Neither of those on their own is very compelling, and when you put them together, they’re not all that scintillating. 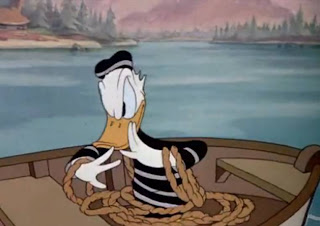 That said, there are some really great individual gags in the short, they’re just small pieces scattered here and there, and not drivers of the story. One of the funniest comes early on when the spring collides with Pluto and ends up around his neck as a collar. It’s a sort of African/National Geographic picture that just made me laugh. 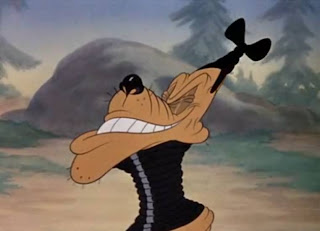 The other great gags actually come at the end of the short, when Donald manages to get the motor running, just in time to have it explode out of the water and drag him around. Pluto gets sucked in behind him, being dragged by a rope. This is where the gags come fast and furious, my favorite coming when Donald crosses a sandbar and “opens” it like a zipper, only to have Pluto cross and close it again. 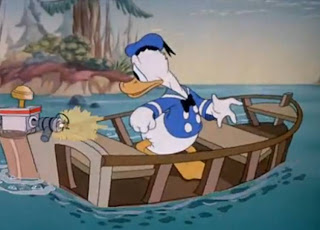 Other than those two sequences, though, the rest of the short is rather slow moving, and doesn’t offer a lot of new ground. We’ve seen Pluto caught up in situations with something that befuddles him plenty of times. The spring is a new idea, but not new enough that it makes it all that great. 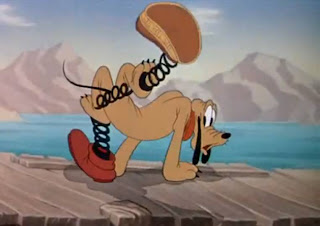 Again, Pluto seems to dominate the screen time, as he does in almost all the shorts he is in. Donald is relegated to a secondary role, trying to start the motor. The bits with the motor almost make it the main character, as it sputters and coughs and fights with Donald. We don’t get to see much of the trademark Donald frustration here, and that handcuffs the short a bit. 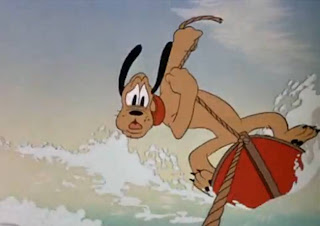 Put Put Troubles would not make my top ten list, obviously, but it does have some fun gags. Overall, though, I don’t think the Donald and Pluto pairing is working as well as Mickey and Pluto or Donald and Goofy. It will be interesting to see how that progresses.