Before we get started today, yes, I am still chasing Alice the Peacemaker, and as soon as I have an update on that, I will post it here. It’s getting to the point where I may have to skip it and come back, which I hate to do, but I know the reason a lot of you read this blog is to follow along with me in the tour through the Disney films, and we have not done those reviews lately. So, I’ll be thinking it over this week, and will either recap where we have been so far and move past Alice the Peacemaker or continue to wait. If you have thoughts either way, let me know.

Now, today I wanted to talk about two films that I think we will look back on as examples of when Disney started becoming Disney again. It’s all well and good to put out blockbuster films like Pirates of the Caribbean or cheapie TV sequels like High School Musical 3 and Hannah Montana, but we all know that Disney at its heart means quality animation. 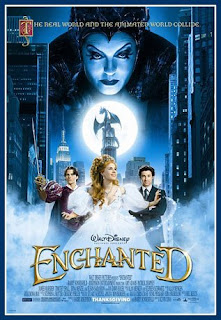 The first film that I think is going to be viewed in a different context years from now is Enchanted. Granted, it was not a huge box office success when it opened a couple of years ago, but this movie has had a long lasting impact. It showed that audiences would take a princess movie again, even if it had a new twist. At it’s heart, Enchanted was a typical princess film, and it succeeded, even if just a little bit.

It also showed that audiences could take hand drawn animation again, when believe it or not, many people in Hollywood wondered if that was the case. Don’t get me started on the reasons why hand drawn films started tanking at the box office (just watch Home On the Range and you’ll understand), but suits kept thinking that hand drawn animation was no longer viable. Enchanted, by including just a small bit of it and succeeding, showed that was not true. 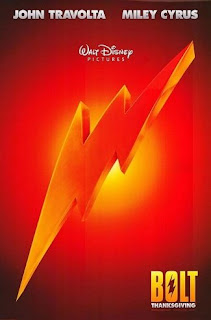 The second film, and probably the most important one, is Bolt. Again, not a huge box office success in the US, because of being released in the wake of Twilight, but look at what’s happening overseas. Bolt opened as the top film at the box office in the UK last weekend, besting date movies like He’s Just Not That Into You and Oscar hopeful Slumdog Millionaire.

Bolt was a good movie, a good animated movie, and a good movie at a time when many doubted that Disney could do good animation anymore. By all reports, John Lasseter was the driving force behind reviving this production, although credit must be given to the many talented artists and writers who worked on it before Lasseter showed up. However, if Lasseter has been given free reign to improve films like this, we could be seeing the beginning of the Third Golden Age of Disney Animation. 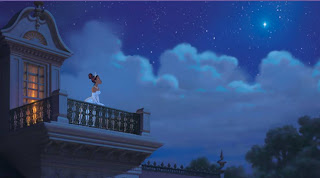 Yes, I said it. Snow White launched the first, The Little Mermaid launched the second, and I say that Bolt will lay the groundwork for the third. Much in the same way that The Great Mouse Detective showed that Disney could do successful animation, Bolt is pulling off that trick again. All of this leads up to the upcoming release of The Princess and the Frog, the new traditionally animated film coming out this December. If that movie hits big, Disney hand drawn animation will be back. And when Disney animation is doing well, the company does well. And it may all be because of a live action princess and a computer animated dog.
Posted by Ryan at 4:40 PM