And so it continues…

8. The Hunchback of Notre Dame 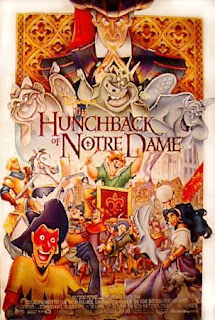 Okay, again, laugh if you want to, but this is probably a sentimental favorite more than anything. Let me give you my story on this one first, before I delve into the charms of the picture.

In college, I was not a Disney guy. I barely read books, even though before I went to college, I had been a voracious reader. I mainly watched TV, listened to Van Halen, ate way too much and stayed up way too late. I wasn’t a partier, but I sure didn’t care about school. Until I met Sally.

Sally was a year ahead of me and she had it down. She’d figured out how to have fun and get the most out of school. I pined for her for a while, then we started dating, and 14 years later we’re still together, 11 of those years spent in marriage. I wanted to spend time with her, so we went to the Lion King together, and she turned me on to Aladdin, Beauty and the Beast and the Little Mermaid. I was hooked. 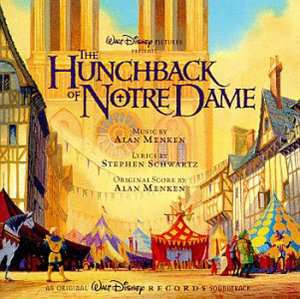 Hunchback came out in year three of that relationship, while we were engaged. She spent the summer in Mexico, on a college abroad program, and I spent it at home. Her influence had gotten me to buy the Disney soundtracks, and of course I got this one the day it came out. So I spent that summer listening to Hunchback over and over again, while playing computer games, reading and daydreaming of what married life was going to be like. It was beyond my wildest dreams.

So, yes, this movie holds a special place in my heart. But it’s also an amazing piece of animation. It’s the most adult animated film Disney has ever made. The themes are very adult, with the ideas of faith, lust, greed, envy all intertwined with a message about social castes and mores. No doubt, this is a deep film. 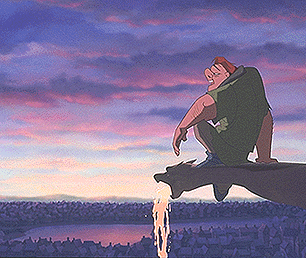 The scene that hooked me, though, was right at the beginning, when Clopin is telling the children the story of how Quasimodo came to be in the tower. As the authorities chase his mother through the streets, the camera shoots the action from above, with parapets streaming past, obscuring the shot below. It’s an amazing piece of cinematography, made even more amazing by the fact that none of exists except on a piece of paper and an animator’s pencil. 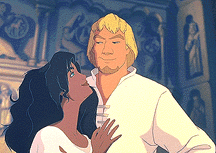 The music is also wonderful. “God Help the Outcasts” as sung by Esmerelda is especially touching, but Quasimodo’s pleas in “Out There” tug at the heart strings as well. Tony Jay’s vocal performance as the villainous Judge Frollo is amazing, and to me, he is the most menacing of the Disney villains. Frollo is not a huge demon like Chernabog or a one note shrill woman like Cruella De Vil. No, he is a conflicted man of faith, trying to reconcile his own feelings with the word of the church. Those are dangerous men, and Frollo is no different.

So, despite the extenuating circumstances, I still think Hunchback deserves a place on this list for its artistry alone. Of course, Michael Eisner loved it, so I could be completely wrong.
Posted by Ryan at 9:17 PM