Another classic animated film today, which is surprising to me. I had thought originally that I preferred the live action films more, but it’s turning out to not be the case.

6. The Many Adventures of Winnie the Pooh

Okay, admit it, all of you love this one. Sure, it’s not technically a feature originally, as all these films were part of the shorts program, but the animation is top quality, and it was released as a feature, so it counts.

The tight story that I praised in Cars and The Parent Trap is not present here. Pooh is a film of short stories, with fun meanderings and sidebars throughout. But that’s what it is supposed to be. The entirety of this film is designed to transport the viewer into a dreamlike quality, happy to be spending time in the Hundred Acre Wood, lazily passing the day. 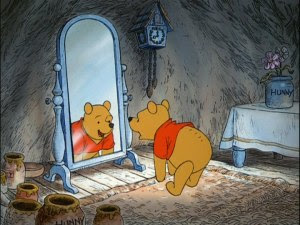 To me, that is the appeal of Pooh, the ability to spend all day in wonder at the beauty of the woods, passing the time with your friends and generally relaxing. That’s probably why I never got the Playhouse Disney series, My Friends Tigger and Pooh, because instead of stumbling into adventures as they do in this movie, Tigger and Pooh are out solving mysteries. Bad idea. 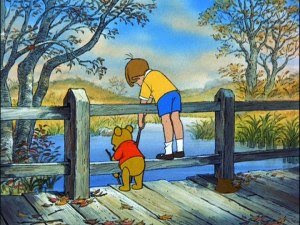 Obviously, the characterization in this film is secondary, but it is quite good nonetheless. Most of the characters are stereotypes, but not in a bad way. Pooh is a not so smart bear, heavy and hungry, but he’s also endearing and charming in a way that is hard to explain. Tigger is a loudmouth, but he’s also caring and concerned about his friends. It’s a touching film in that way, that the main theme is friendship. 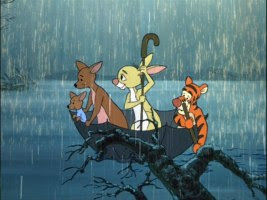 What really cinches it for me, though, is how much of this film sticks in my mind. Often, around the house, you’ll find my wife or I tapping our heads and saying “Think, think, think,” or singing the “Rumbly In My Tumbly” song. I think about things from this film all the time. It’s one of the most memorable Disney films, and the music, the characters and more make it one of my top ten.
Posted by Ryan at 4:44 PM