The Hand Behind the Mouse, Part 3

Today, we’ll finish up with the story of Ub Iwerks, as we prepare for the first of his films with Walt in California, Alice the Peacemaker. With Ub drawing the films, the motion becomes more fluid and the animation is a bit more lively, according to both the film and book, The Hand Behind the Mouse.

We all know the story of what happens next with Disney, as the Alice Comedies run their course, and the distributor Charles Mintz, new husband of Margaret Winkler, demands a rabbit for the next subject. Ub designs Oswald the Lucky Rabbit, who goes on to a series of successful cartoons, only to be stolen by Mintz. 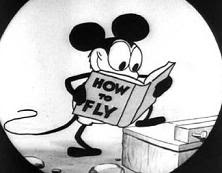 Now, here’s another point that I question about both the book and film. In their version of the story, before Walt departed for New York, Ub informed him that the staff was already leaving to join Mintz’s studio, but Walt did not believe it. Now, I have not heard this anywhere else, in any of the Walt Disney biographies. This is not to say that it is not true, but similar to the claim that Ub was in the Kansas City garage helping to animate the Laugh-O-Grams and Little Red Riding Hood, it doesn’t match up with other information available.

However, let me stress that this does not mean it is not true. The main assertion of both book and film is that Ub Iwerks came up with Mickey Mouse as Walt was riding the train back from New York. For years, the Disney Company insisted that Walt had sketched Mickey first, on the train. But, the company acknowledged Ub as the designer only recently, before the film was released. So, it is entirely possible that both of the other earlier assertions are true, but we may never know for sure, because there are no records to prove things either way.

Regardless, Ub animated the first Mickey, Plane Crazy, all by himself, and as Mickey grew more and more famous, Walt started messing with Ub’s timing sheets, and Ub grew resentful. He struck out on his own, forming his own studio, which would host some of the greatest animators the world would ever know. Ultimately, however, it was unsuccessful, as Ub needed Walt’s hand to steer him in the right direction and curb some of his darker impulses. 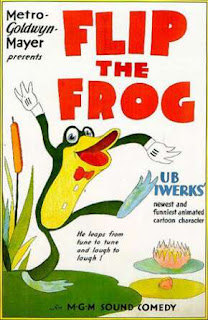 If you watch any of the Iwerks Studio cartoons, they are very surreal and dark, as Ub basically let his boys run free. Contrast that to the bright and cheery tone of the Mickey and Silly Symphony cartoons, and you can see why Depression era audiences made one more popular than the other. The film gives you great examples of this. You can check out one of these, Balloon Land, and see what I'm talking about. 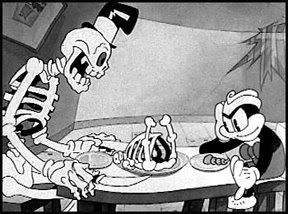 Ub would return to the studio in the early 40s, but he was no longer an animator. He would dedicate the rest of his life to creating effects for the animated and live action films. His techniques are still in use today in many cases, as he created things such as the sodium matte process to combine animation and live action, among many others. He won an Academy Award for his work on The Birds, with Alfred Hitchcock, and helped to design film processes for Disneyland. 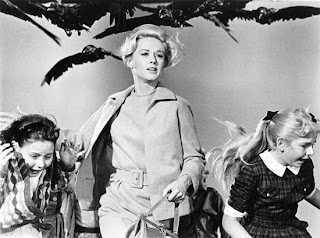 An Ub Iwerks crafted scene from The Birds

The Hand Behind The Mouse, both book and film, offers a unique perspective on this man. Both are engrossing in their own right, but the film is much better crafted, and draws the audience in better. However, I feel like they work best in tandem, because that way you get a full picture of what Ub did. The only critique I would have is that so much time is spent on the work, that it is hard to get a good feel for what he was like, other than a man who loved a challenge. Once he had mastered something, he moved on. His son recalls that once Ub bowled a 300 game, he put his bowling ball away and never used it again. That was the kind of person he was.

This was one of the premier artists of the 20th century, to my mind. The man created so many characters and then reinvented himself as an effects man. He singlehandedly changed the film industry with his work, but is today no more well known than many silent crew members on most films. That is a shame, but The Hand Behind The Mouse helps with that.
Posted by Ryan at 8:39 PM