Birds in the Spring

The amazing work on the Mickey Mouse cartoons of 1933 so far sets high bar for the Silly Symphonies to meet. Birds in the Spring doesn’t quite live up to that, I have to be honest. It is still a good short, and it has moments of wonderful work, but overall falls short of the Mickeys. 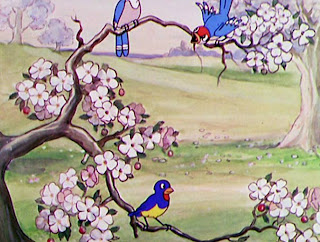 To be fair, this is a pastoral short, much more of a throwback to the earlier Silly Symphonies, like the “season” shorts of Summer or Spring. As such, it lacks a strong story with major conflict, even though it does have a main narrative. There is one standout character that makes it all worthwhile, though.

The basics of the short follow a family of birds, as they are born and grow up. There are three birds born at the same time, and one is obviously different. The “black sheep” of the family, this small bird messes up the singing of his brothers, and ends up on his own out in the world by accident. The chaos ensues. 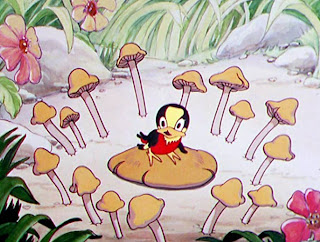 Our little hero bird causes a lot of problems, including getting chased by a snake that he ties in knots and starting a swarm of bees rampaging through the woods. This little bird is a very appealing character, a hopeful blunderer that causes chaos in his wake. In some ways, he is reminiscent of Pluto. 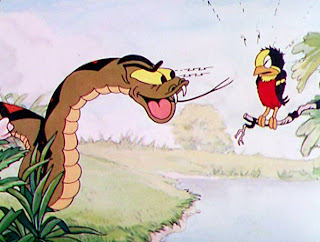 The bird is done well, and makes the short more fun than a simple slice of life piece. Having this “child” be the lead character was a great choice by the Disney crew. The only problem is that by having him be the well intentioned blunderer, there’s no real sense of conflict to the proceedings.

Contrast this bird’s actions with those of Pluto in Mickey’s Pal Pluto. Pluto also causes some unintentional chaos, but then redeems himself with the heroic rescue of the kittens from the well. This bird does no such thing, but instead ends up being reprimanded by his father as the short ends. 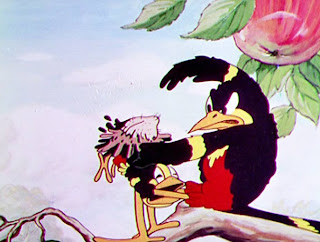 Still, the short is fun, and that counts for a lot. You feel good watching it, because of the bright colors and peaceful nature. I will say that after a few minutes, I got tired of the chirping from the various birds, but that wore off towards the end as I got more involved in the action.

There’s even some great animation work here, such as the scene where the birds are first born. After they hatch, the baby birds start crying, and the scene fades between the three of them crying to a shot of them singing years later, as fully formed children. It’s a great transition that defies normal expectations. 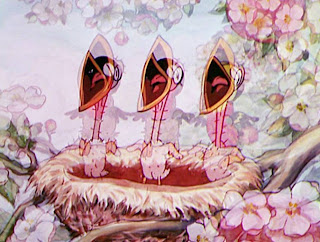 Like I said, this short is enjoyable, and it features some good character design and animation on the lead bird, as well as some nice color and backgrounds. But as a whole, it can’t live up to the work that Disney has been producing on the Mickey shorts of 1933. That’s a high bar to clear, though, so this one is still worth checking out.