Uncle Mickey Mouse is something we’ve seen a few times so far, in shorts like Mickey’s Orphans. Mickey seems like a good parent, and in Giantland, today’s subject, he goes to the time honored tradition of telling your kids a story. What a story it is, too. 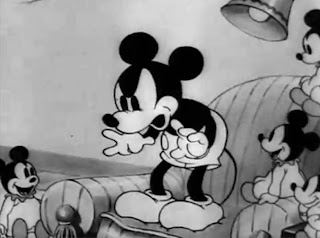 Mickey tells his nephews the story of Jack and the Beanstalk, with Mickey playing the role of Jack. What’s so interesting to me is that this is a story that would be retold later in the Disney features, as part of Fun and Fancy Free. That story features Donald and Goofy as well, and fleshes out the story over a featurette rather than a short.

This short skips the portion of the story with Jack and the cow and the magic beans, and goes straight to Mickey climbing the beanstalk to Giantland. We are told it is Giantland by the sign on the ground as Mickey reaches the top, then hitches a ride on a butterfly to the castle of the Giant. 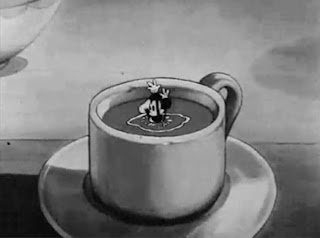 It’s not long until we are introduced to the Giant, who comes trodding down the path, singing that he is “the King of the Giants.” That’s rather odd, because there are no other giants in the short, so I’m not entirely sure who he is the king of, exactly. His introduction is a great piece of animation, though. We see the full shot of the giant, then go to a close up of his feet, and the world seems to turn underneath the power of his feet. It’s quite a good effect, and the first time we’ve seen something like that in a while.

You can imagine what happens from there. Mickey gets onto the dinner table of the Giant, unbeknownst to the big guy. He hides in the sugar bowl, in the cheese, and eventually gets swallowed by the Giant in a sandwich. That leads to the funniest part of the film. 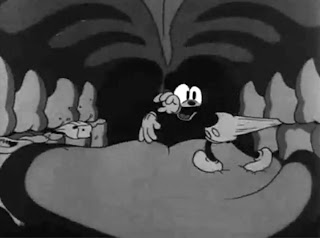 Mickey hangs out in the Giant’s mouth for a good minute or two, dodging peas as the Giant drops them in, then sticks a pipe in and starts smoking Mickey out. The pipe is the one that gets Mickey, as he blows back into the pipe and spurts tobacco all over the room.

The mouth segment is funny, but then you have Mickey’s escape, which is pretty good as well. He manages to launch pepper into the Giant’s face, with an elaborate fork/spoon lever system, and escape out the front door. 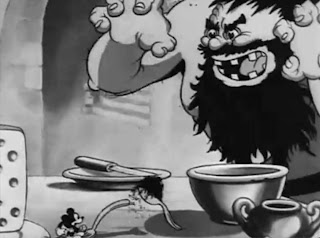 One interesting twist here, though, is instead of chopping the beanstalk down when the Giant chases him, Mickey lights it on fire. The Giant is menaced by the firelings, my favorite little guys. Seriously, I want a plush of the little firelings. Disney, get on that. 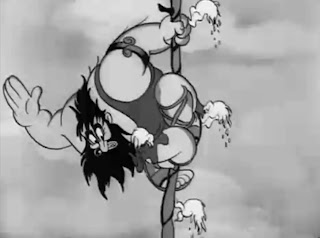 In the end, Mickey prevails, of course. This short offers a good glimpse of Mickey the hero, who we don’t get to see as often anymore. It suffers though, from not having any of the supporting characters around. No Pluto or Minnie to offer a foil to Mickey. That’s really the only flaw I see, however, as this is a very entertaining and fun short to watch.