Mickey’s Gala Premier may be the first short of 1933 that gives an insight into the mindset of the Disney studio at the time. While the rest of the shorts in that year have been excellent, this one speaks a great deal to the place of Mickey in Hollywood, and what the Disney artists, and most likely Walt himself, think about where their studio and their biggest star belong. 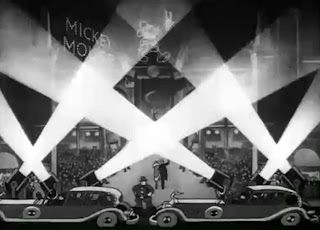 The basic idea of this short is that everyone is arriving to Graumann’s Chinese Theatre to the premiere of Mickey’s latest short. The entire beginning of the short features caricatures of celebrities on the red carpet, like the Keystone Kops, the Marx Brothers, Clark Gable, Jimmy Durante and many more that I didn’t recognize. All of Hollywood has turned out to salute Mickey on his big night. 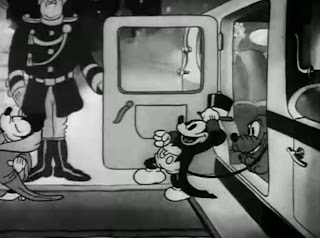 Mickey shows up as well, with Minnie, Pluto, Horace and Clarabelle in tow. Inside the theatre, everyone watches the short-within-a-short, Galloping Romance. This mini-short is really a rehash of The Birthday Party and The Cactus Kid, as Mickey and Minnie are playing music together until Pete kidnaps her and rides away. Mickey saves her, of course. What’s interesting is that despite the rehash, the animation appears to be new. It would have been easy to use old animation in this short, since it is not the focal point of the short, but Disney went to the extra effort to put in new work. 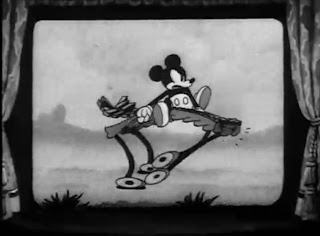 The ending of the short is the telling thing about it. After Galloping Romance ends, Mickey is brought on stage and congratulated by the gathered masses. Finally, Greta Garbo herself strides on stage and plants a big kiss on our main mouse. At that point, Mickey wakes up in bed, revealing that it was all just a dream. 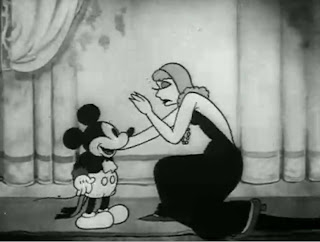 While Disney has used the “just a dream” premise before, I think here it reveals a great deal about the mindset of Walt. Here’s my amateur psychologist take: the short shows Mickey in his rightful place among the stars of Hollywood. Indeed, at the time, Mickey’s cartoons were every bit as popular if not more popular than the stars portrayed in this film. Walt’s asserting his place here. But he couldn’t help to be self-deprecating, and have it all turn out to be a dream.

There could have been a few other endings that would have worked – having Minnie get jealous of Garbo, for example. But the studio didn’t choose that ending or any other. By having Mickey’s stardom turn out to be a dream, it takes the arrogance out of the short and makes it adorable. It’s great work by Disney. 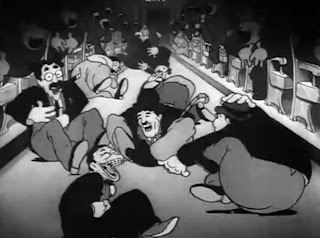 It’s undeniable, though, that at this point in 1933, Mickey is the biggest cartoon star of the day, and he belongs in the Hollywood pantheon. You can sense the shift that has taken place from the early Mickeys of barnyard life to the glitz and glamour of Hollywood. The current Mickey is a well to do man, living a suburban life. It obviously mirrors the transformation of Walt himself. But more on that to come.

In the meantime, enjoy Mickey’s Gala Premiere, and play name the celebrity. It’s a fun game to play, as you see all the stars rolling in the aisles. Enjoy!