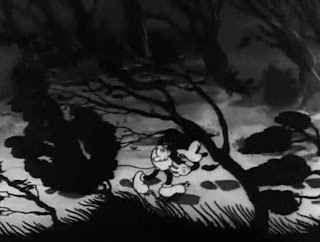 The basics of this one are that Mickey has a dream where Pluto is abducted by a ghost like figure, who turns out to be a mad scientist. The scientist has a plan to graft Pluto’s head on a chicken’s body and vice versa. Mickey pursues Pluto and gets involved himself, as the scientist captures him and is about to cut him open before he wakes up from the dream. 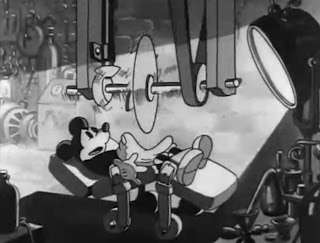 That’s the simple storyline, but there’s so much more to this short. For one thing, this has some of the best use of light and dark and lighting effects I’ve seen in any of the Disney shorts. Mickey’s entrance into the mad scientist’s castle is lit by torches, and we get side shots of him illuminated by a fire that really shows the rounded edges of the design and gives Mickey a depth that has not always been present.

One thing that is lifted from another Disney short is Mickey’s travels through the catacombs of the castle. This looks like a direct lift of the background from Egyptian Melodies, with Mickey replacing the spider in that short. It’s still a great effect, that calls into mind the modern day POV video games, again showing that Disney was ahead of their time. 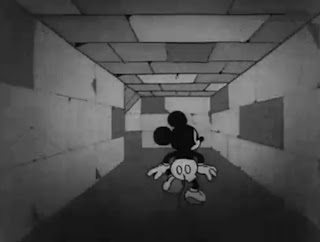 Mickey’s constant battles with skeletons is the real central part of the short. We see Mickey fighting skeletons in a variety of settings, as they pop out of walls, from under stair cases, appear as ghosts, throw their heads at him and even form a spider that ultimately traps him. These skeletons are some of the most imaginative characters I’ve seen, and they are expressive, even while remaining skeletons. Great animation work. 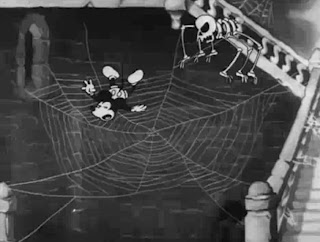 The mad doctor is a great character as well. He is instantly menacing and his craziness comes across quickly. Something that should be ludicrous – grafting a dog’s head on a chicken – really gets scary. Pluto’s emotions are evident on his face and in his body, as an x-ray shows his bones collapsing in fear. Again, wonderful gags that really set the mood. 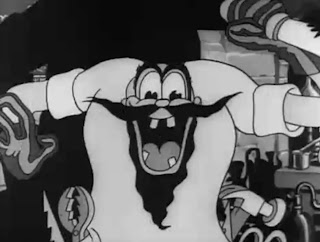 This has to be the scariest Mickey short so far, even if it does turn out to be all a dream. It manages to toe the line between funny and scary, much in the same way the Haunted Mansion does at the Disney parks. The skeleton designs are much more realistic and frightening than in other Disney shorts, but they show emotions that make them humorous. This is a fantastic short, and watching it as October dawns put a big smile on my face. A great way to kick off the Halloween season!