Honestly, I don’t have a lot to say about Mickey’s Mechanical Man. It’s a good Mickey cartoon with a straightforward story and some fun gags. In fact, it reminds me a bit of a Looney Tunes cartoon with its silliness and crazy premise. However, compared to some of the other 1933 Mickey shorts, it is not the best. 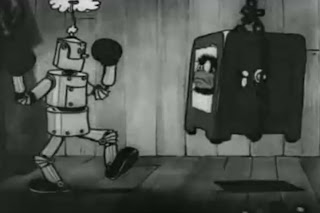 The premise itself is very good – Mickey and a robot (I presume made by Mickey, but it’s never stated) have a prize fight against Beppo the Gorilla, who was last seen in the early short The Gorilla Mystery. Just the simple fact of a fight between a robot and a gorilla being accepted as the norm made me laugh. Kudos to Disney for the set up alone. 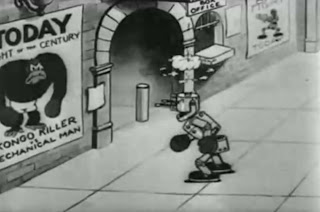 The twist, and you know there had to be one, is that Mickey’s robot doesn’t fight well at all, until Minnie blows her car horn. When that happens, the robot goes nuts and tears up the gym and punches everything in sight, so long as it has Beppo’s picture on it. Like I said, it’s the kind of twist you’d expect from the Warner Bros. cartoons, but it works really well. 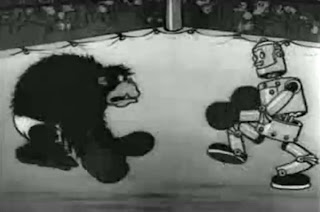 The work on the robot is the best animation in this short. It’s the kind of frantic, kinetic work that you don’t often see from Disney. Mickey, Minnie and even Pluto to some degree are very controlled figures. Even when Pluto runs amok, he is still in control of his limbs. The robot, on the other hand, goes wild, arms and legs flailing everywhere, motion flying all around. 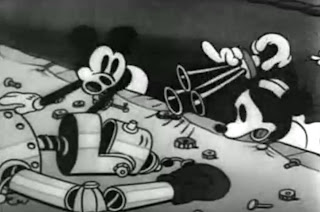 As you could probably predict, the fight goes the wrong way for the majority of the time, until Minnie realizes what’s wrong. She runs outside, grabs the car horn and brings it inside. After a quick squeeze, the robot goes nuts again, destroying the gorilla, then blowing up itself. 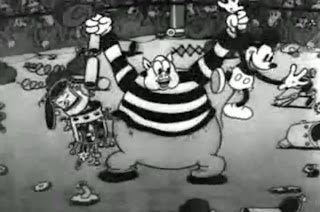 The plot is the big thing in this short, and with a good premise and a fun twist, it works really well. Sure, we have some good animation work on the mechanical man, but Mickey and Minnie are the same as we’ve seen before. The real thing this short accomplishes is fun. It’s amusing to watch and easy to digest. That’s something that should not be underestimated.