As someone who grew up in and around church, the Sunday School story of Noah’s Ark is near and dear to my heart. So when I saw that today’s short would be Father Noah’s Ark, I was excited. I couldn’t wait to see the work that Disney would do with one of my favorite Bible stories.

My sum conclusion? Disney relied greatly on people being familiar with the religious aspects of the story, and worried only about the mechanics, leaving the short a little flat in the end. While it’s still entertaining, it’s not up to the standard that Disney has been hitting in the 1933 shorts. 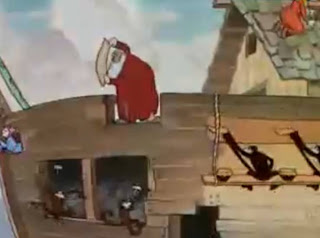 The story of the short is obvious – the Noah’s Ark story. But for those of you who didn’t grow up in Sunday School class: Noah is a devout Christian, and he is warned that a catastrophic flood is coming. So, he and his family build an ark, and gather two of every animals on board. When the flood comes, Noah, his family and the animals sail away, suffering on board for days, until finally the sun comes out, dries up the rain and they disembark to repopulate the Earth.

In the Disney version, more attention is paid to the construction of the ark, and the inventive ways that the animals can help. For example, a pair of monkeys help to make boards by unleashing a rhino on a tree, that shaves off a board. They capture the rhino, turn him around and do it all over again. Then, we have one of Noah’s sons pick up the lumber and drive it to the ark in a “car” where the wheels are made up of snakes biting their own tails. 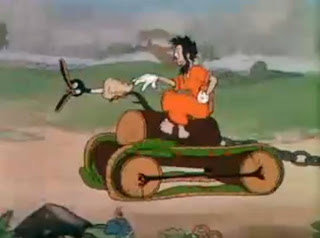 These are good gags, but overall they serve to downplay the seriousness of the story. Don’t forget, these characters are preparing for the flood that will end life on Earth. It seems particularly strange for them to be going about things with such a song in their heart, literally. Noah, his sons and daughters and his wife all break out into song at the beginning of the short. 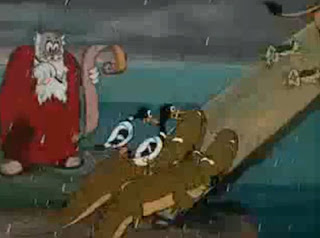 Then, as the rains start, all the animals load onto the boat, but Noah and family pull the plank up so they can leave a pair of skunks stranded. Again, it seems just remarkably out of place to have a gag that could be construed as callous and mean.

Ultimately, of course, things turn out okay. But not before we see Noah and his family in the ark, during the rainstorm, praying and pleading to survive. It’s such a tonal shift from the lighthearted fare of earlier that it seems very disjointed. 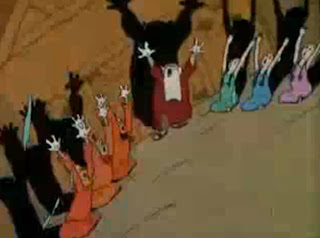 Finally, we reach dry land, and a dove brings an olive branch, letting Noah know that it’s okay to disembark. There’s a brief song of gratitude, and all the animals disembark. 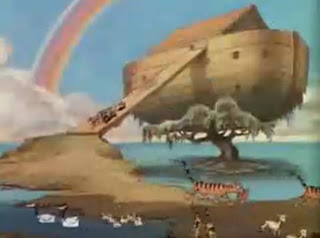 Father Noah’s Ark is just sort of an odd short. It gets the point of the story across, but does so in a sort of paint by numbers way. You go from point A to point B in a straightforward manner, and while there are gags along the way, they’re not as funny as in previous shorts. I’d have to say for me, this one was a disappointment.