The Steeple Chase is the first Mickey short in a while to feature a sports theme. As a long time Disney cartoon lover, it’s only natural that you would compare this to the later Goofy shorts, where the loveable Goof showed us how to play sports. This is not one of those types of shorts, but it shares many of the traits with those Goofy classics.

The set up to this one is actually rather complex for a Mickey short. Mickey is the jockey of Thunderbolt, a prize horse ready to run in the steeple chase. The horse belongs to the Colonel, an old man who is sponsoring Mickey in the race. The Colonel wants Mickey and Thunderbolt to win. 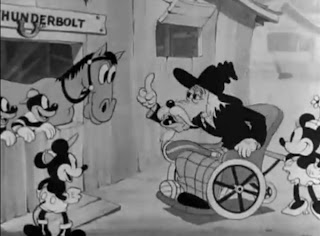 Unfortunately, when Mickey and the Colonel leave the stables, Thunderbolt gets into the moonshine, and drinks a whole bottle. That leaves Thunderbolt out cold, after some crazy antics at the expense of the stable boys. 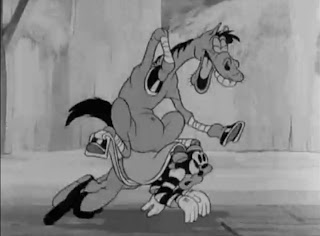 Regardless, Mickey realizes that he has to run the race and win, or he’ll break the Colonel’s heart. It reminds me a lot of old Spider-Man comics, where Spider-Man thought he had to do things all the time because otherwise his poor old Aunt May would pass away, presumably from the shock to her system. What is poor Mickey to do? 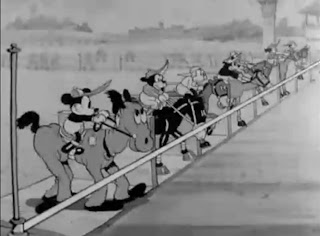 Regardless, the race itself is the fun part of the short, as the costume horse struggles to catch up. The gags aren’t the best ever, but they are fun, including the horse going under hurdles and throwing Mickey over, the horse waddling into a pond and getting attacked by bees. As you could imagine, the bees are the impetus for the win by Mickey and crew. 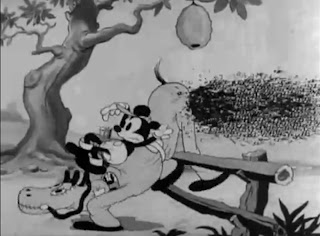 While the other horses tap the beehive with their tails while going over a hurdle, the costume horse gets tangled up and is stung repeatedly. This is where it really reminded me of the Goofy cartoons, because it was non stop from that point forward. The bees kept hitting the horse, spurring it on and over other horses until Mickey won. 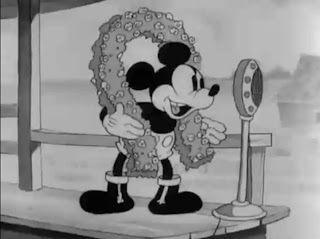 In the end, having won the race, Mickey accepts the prize for the Colonel. What’s interesting is that we do not see the Colonel again, after the beginning of the short. Since his happiness played such a big role, you would expect to see him again, but there’s only Mickey’s mention of him in his acceptance speech.

The Steeple Chase is good, but not great. I enjoyed it, but it is not as good as the Goofy sports themed shorts, nor quite as entertaining as some of the 1933 Mickeys. Still, it’s a pretty good short with some interesting elements, that I hope everyone will enjoy.