Another day, another hit Mickey Mouse cartoon, this time it’s Ye Olden Days, a tale of Mickey in medieval times, complete with songs, jousts and feasts. This is a masterpiece in my opinion. It’s definitely the finest Mickey short so far in 1933, and that’s saying something. 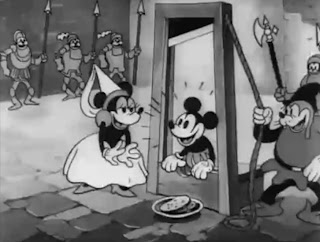 What makes this so good? Simple. The characters are perfect. We get every one of the main Disney characters of the time, cast in a role that fits them perfectly, and the story proceeds with each playing their part. You’d think that would be a simple formula, but it’s not always the case. 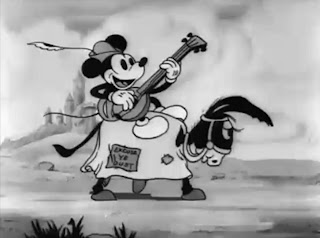 For example, we have Mickey as the underdog squire or knight, riding a beaten down pony with a blanket for a saddle. He comes to Minnie’s rescue, and is the loveable underdog the entire way, skating out of trouble and managing to bumble his way through, then uses his wit and brains to win the day.

Minnie plays the sweet princess who is being forced to marry the prince of the land, played by Goofy. Goofy is identified in the title card as “Dippy Dawg,” the first time I’ve seen him mentioned by name. He would change to Goofy later on in his career. The king, played by Pete, is trying to force them to marry, but Minnie refuses and is thrown in the tower jail. 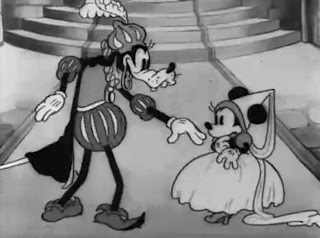 That’s where Mickey comes in, and wins Minnie’s heart. But the king doesn’t want any part of that, and forces Mickey and Goofy to fight for Minnie’s affections. The fight is a great piece of work, featuring the two running all around the castle, Mickey’s donkey besting Goofy’s horse in a fistfight, and Mickey chopping off Goofy’s lance and using it to chase him out of the castle. 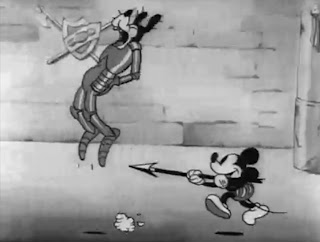 This is also the first Mickey cartoon that has really used songs to their fullest extent. Mickey is introduced with a song that he sings as he rides his donkey. The king sings a song to introduce the royal court, including the prince and princess. Mickey sings outside Minnie’s tower window. You see here the beginnings of a musical, which would serve the animators well in coming years as they began to work on Snow White. 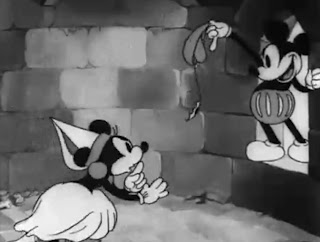 In the end, though, it all comes back to the characters. They are cast well, animated perfectly and filled with personality and life. You don’t think about the drawings at all in this short, and that’s a testament to the love and effort that was put into the work. Ye Olden Days is a fantastic short, and one of the true classics of Mickey’s career.