I know I’ve said it a million times already, but Disney hit its stride with Mickey Mouse in late 1932, and all of the 1933 shorts have kept that going. The Mail Pilot is no exception, featuring some fantastic animation to compliment a simple but fun plot.

This one features Mickey as a pilot carrying an important package, looking to avoid the mail bandit Pete. Of course, that doesn’t happen, and the two battle it out in the skies, using their planes to fight high and low. Our hero ends up winning, and delivers the package as required as well as turning Pete over to the authorities. 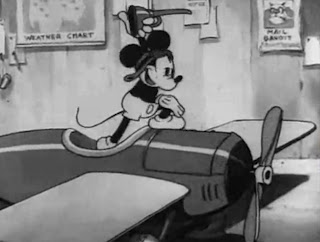 The animation in The Mail Pilot is outstanding, not just getting us from point A to point B, or plodding along from side to side, but taking dynamic angles, shooting the camera straight on at Mickey flying in the rain, looking up or down at the planes in flight and making sure to keep the action in full focus. 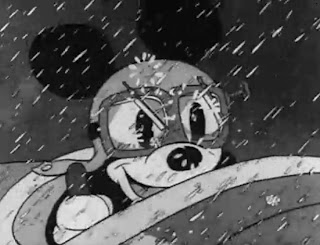 This is probably the most dynamic of the Mickey shorts in quite some time, for that reason. This features Mickey as the dashing hero, a role he has not played since his earliest appearances. Certainly, he gets menaced and is the underdog, but he resorts to quick thinking, trying to make his downed plane into a helicopter with a jury-rigged clothesline or taking the propeller off a windmill to power his plane. 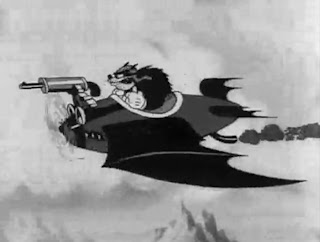 There’s also a bit of the romantic, as Mickey has a picture of Minnie with him in the plane. It’s a bit of a prescient piece, as this is still 6 years before World War II, when many American men would be in planes with pictures of their sweethearts. Here, it’s a simple gag, but Minnie’s picture gives Mickey the strength to push forward. 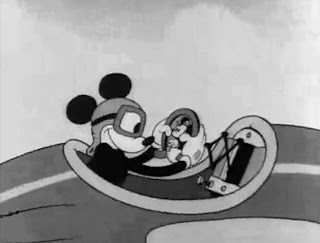 The gags here are pretty darn good as well, including the ways Mickey makes his plane keep going that I mentioned before. There’s also some great gags like Pete being dragged through a church steeple and then to the ground, having the church bells wrapped around him as he clanks his way into a mail bag to be captured. 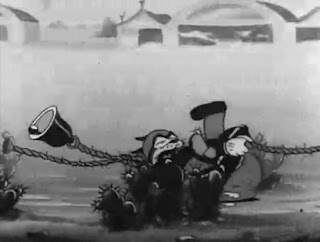 I think The Mail Pilot might be my new favorite of 1933. Considering I’ve said that about three times now, it shows you how high the quality of these shorts is. Disney found a formula that works with Mickey in the 1932-33 era, and it makes me pretty happy just to be watching the greatness.