If you’re like me, you are somewhat familiar with the tale of the Pied Piper, even if you don’t know all the details. That made the prospect of viewing Disney’s Silly Symphony version a happy one. And it did not disappoint, but the ending was quite a surprise for me, because I had forgotten that particular aspect of the story. 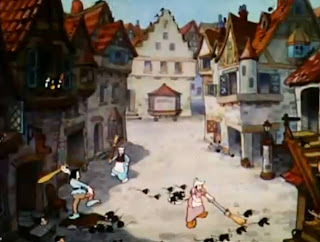 Start with the animation work here. It is fantastic. The animation of the characters is extremely well done, with each human figure having different features, and even the rats of Hamelin are distinct and different from one another. That’s quite a feat when you’re drawing rats or a crowd scene of people, but the people we see up close are all distinct. This short had to have taken a long time to draw.

You also get amazing characterization in the animation. There are two main characters in the short – the Pied Piper and the Mayor of Hamlin. Both are instantly recognizable as the protagonist and antagonist, respectively. The Mayor’s grubby hands and scheming eyes come to the forefront first thing, as does the Pied Piper’s earnest eyes and carefree, innocent nature. 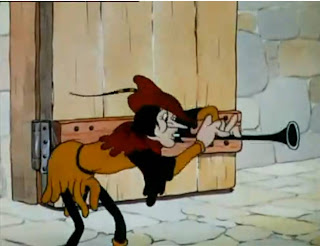 As far as the story goes, it’s familiar, I’m sure. The rats have overrun the town of Hamelin, and the populace is revolting. The mayor promises a bag of gold to the person who can rid the town of the rats. He says this just as the Pied Piper strolls into town, so naturally, the newcomer takes him up on the offer.

As the Pied Piper plays, he leads the rats out the front gates, and off into a field, making them believe that there’s a large block of cheese there for them. However, when he returns for his bag of gold, the Mayor decides to double cross him, and refuses. 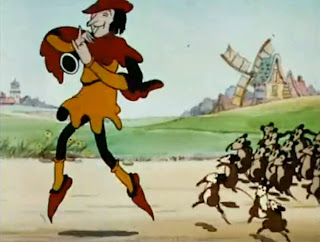 This is the part I did not remember. The Pied Piper curses the town, because it’s not just the Mayor who jeers at him from above. The Piper tells the townsfolk that he will steal their children, because the kids should not grow up as evil as they are. The Mayor challenges him to do his worst. Bad move.

The Piper’s playing brings out the children, who follow him to a mountain hideaway, full of toys, as the song “Toyland” plays. I do not know the history of this song, but I know it’s a popular one today at the Disney Parks around Christmas time. Was this the first time the song was performed? Or was it a popular song before this? 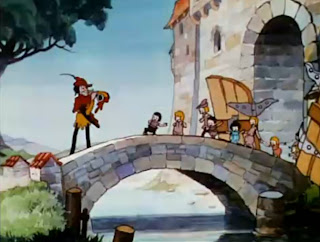 Regardless, the short ends with the children in the Toyland, and the townspeople mad at the mayor. It’s a great story, with real consequences, and not necessarily a happy ending, which is rare for Disney. The ending is really a morally ambiguous one, and that’s not something you see from short cartoons. Very interesting and extremely well done.