The trio shorts are some of my favorites, no doubt. The team of Mickey, Donald and Goofy makes for great comedy, because they are so different. Although Lonesome Ghosts is probably my favorite example, Boat Builders is a pretty good one.

As usual in these shorts, it involves the three working together on a job. You probably guessed, but this one involves building a boat. The twist, though, is that this is a “pre-made” boat, and the boys are trying to produce it from a kit. That is where the comedy lies, as the instructions say that it’s “so easy a child could do it” – a line that gets repeated often by Donald and Mickey throughout the short. 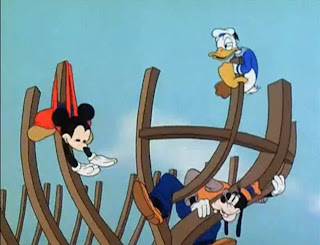 What makes the trio shorts so good is that each character gets their own little spotlight within the short. Not only that, but the gags for each character are different, making each one a little character study that really gives the audience an idea who that character is. For example, Mickey’s role in this one is as the good natured captain, and he has a small bit where he extends the mast of the ship while standing on it, ending up like a scarecrow. But Mickey, as always, smiles and laughs his way through it. 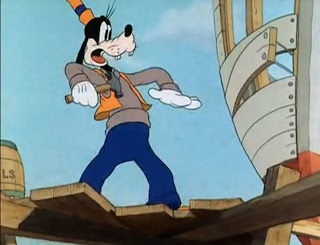 Meanwhile, as you can imagine, Donald’s bit of the short involves him getting frustrated. A little twist in this short is that both Goofy and Donald’s predicaments are indirectly caused by Mickey. Donald is trying to paint the rudder, but Mickey installs the wheel at the same time. Mickey turns the steering wheel, causing Donald to get tangled up in the swing he’s using to lower himself and caught up in the rudder. 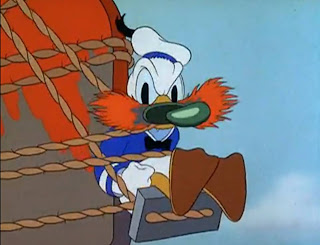 My favorite, though, is Goofy’s interaction with the masthead figure. As was the norm on old ships, the masthead is an attractive lady. Goofy, being who he is, mistakes the figure for an actual woman. His interactions with the figure are hilarious, as we see the Goof handling the ladies for the first time. Even though it’s a fake lady, Goofy still tries to turn on the charm, with hilarious results. 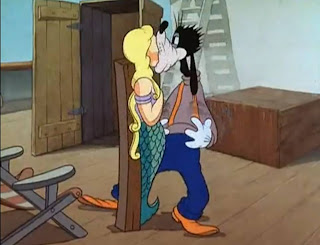 The end gag is pretty good as well, as Minnie tries to christen the ship with a bottle of champagne. She ends up whacking the ship so hard that the fold up kit begins folding up on our heroes as they sail out to sea. Again, great work by the animators because this sequence is flat out hilarious. 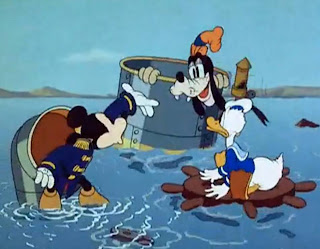 The closing scene of the three in the water illustrates their character again so beautifully. Mickey merely chuckles, Goofy is somewhat bewildered, and Donald is angry. In a simple scene, the animators communicate to the viewer exactly who these characters are. To me, that is what made Disney so successful, is the focus on character and story over flash. Boat Builders is a good example of that.