First, much thanks to everyone for checking in last week during Snow White Week. We saw great traffic at the blog, and I appreciate you all sticking with me all week and for months before. I especially appreciate Brian Sibley coming by and chiming in on his book. Thanks, Brian, and great work on the Snow White Blu Ray!

Now, on to one of my favorite if not my all time favorite Mickey shorts – Lonesome Ghosts. I’ll admit, I didn’t come into this one unbiased. Lonesome Ghosts has been a favorite of mine for over 20 years, since I first saw it one Halloween on Disney Channel. You know, back when Disney Channel aired Disney cartoons? No, you don’t remember that? Yeah, it was a while ago. 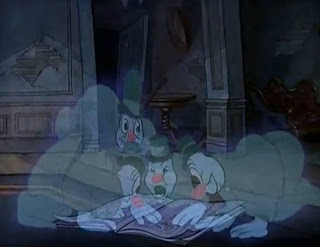 It’s also a cartoon that I appreciate more now that I have seen all that came before it. Not that the other Mickey cartoons of 1937 weren’t good, but Lonesome Ghosts was the first one I watched where I said, “This could have been made today.” Think about that. If you saw Disney produce a short today, and it looked like Lonesome Ghosts, would you be surprised? Probably not, and that’s a testament to the work of these animators over 70 years ago.

The set up of having bored ghosts contact Mickey, Donald and Goofy is brilliant. How many times have we seen the old saw that ghost hunters come to a spooky old house? I saw it just last week in a bad SyFy movie. That story is beautifully represented here, because it’s the ghosts who call, just because they’re looking for something to do. 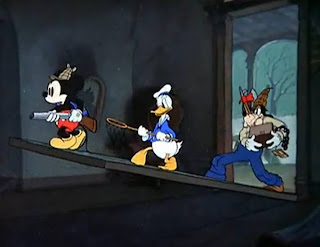 I also like the fact that each of the three characters gets a little moment to play with the ghosts. This is one of those shorts that feels like it goes by so quickly, because each segment is action packed and fun. Mickey gets the first shot, as the ghosts play with a door, opening from the floor, the wall and flooding the room through the door. 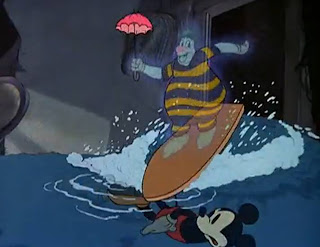 Donald goes next, trying to fight a ghost, as you would imagine. It’s interesting to note that each of these three little vignettes reveals the character’s nature, rather than just being one note gags. Mickey gets overwhelmed by the ghosts, Donald tries to fight, and Goofy gets tricked into, well, a goofy situation. 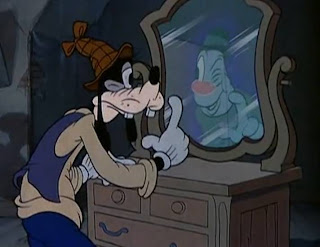 My favorite part of this short is Goofy and the ghost at the dresser. The ghost mirroring Goofy in the mirror and the ultimate end of Goofy getting shoved out the door are just hilarious. It’s really the way that Goofy will ultimately go in his solo series, and it’s great seeing a sneak peek of that. 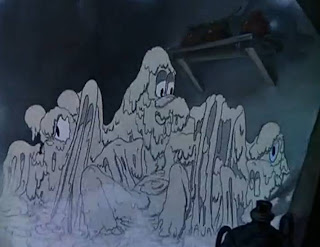 The final gag is a classic as well. The trio get covered in molasses and flour, leading their appearance to scare the ghosts away. It’s the typical Disney ending, as the leads sort of blunder into the solution, rather than showing their wits. It’s part of what makes this short so endearing. Again, one of my all time favorites.