We’ve talked quite a bit here about the role Mickey has been subjected to in recent shorts – almost a guest star in his own shorts, with Donald and Goofy becoming more and more prominent. The animators at this point were just not able to do the same things with Mickey that they had been able to do in the late 20’s and early 30’s. That’s why it’s nice for me to see a short like Mickey’s Parrot, where Mickey takes center stage again.

This one is another favorite of mine, because I have seen it so many times. It’s one that holds up really well, and features some great gags and acting by Mickey. This is the Mickey I think of when I picture him as a cartoon in my mind. He is brave, not all that adept, but still pushes forward - something that will continue to be part of his character for years to come. 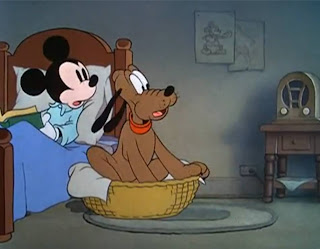 The basic plot is that a radio bulletin comes on that informs Mickey and Pluto that there’s a criminal on the loose. At the same time, a talking parrot escapes from a nearby truck, and wanders into Mickey’s house. Confusion ensues, naturally, to the point where Mickey is wandering around the house with a shotgun, searching for the crook in his basement. 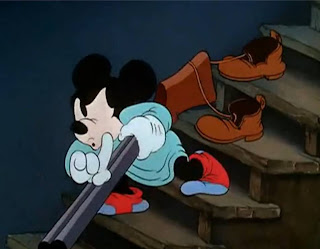 What I love about this short is not the simple case of mistaken identity, but the way Mickey reacts to it. His facial expressions convey so much emotion, especially the sheepish fear when he thinks the crook is standing right behind him. We saw this some in The Whalers, but it really feels like there’s more going on with Mickey’s expressions in the recent shorts. 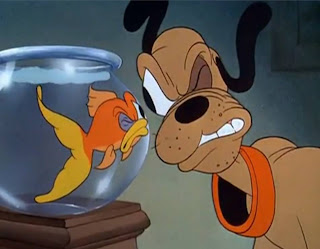 Pluto is also good in this short, doing his usual best to take the spotlight away from anyone else in the short. Pluto has a habit of stealing the spotlight, but he’s usually done so well that it doesn’t matter. This short is rather subpar Pluto in my mind, although still funny. The mistaken identity extends to a goldfish, as Pluto hears the parrot wrestling with a can of fish food and thinks the goldfish is challenging him. 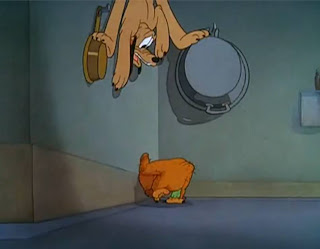 Pluto really gets emasculated in this short, as after the goldfish bites his nose, the parrot takes him to task, cornering him and driving him up the wall. Of course, the parrot is hidden inside a turkey that fell out of the fridge, which would be a little scary, so I can cut him some slack. 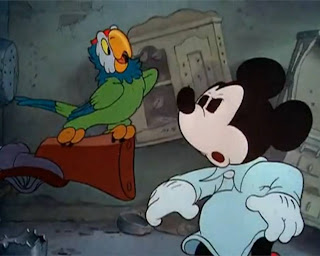 In the end, we get some classic Mickey short finale magic. The parrot is in the kitchen and tips corn kernels over onto the stove, causing a rapid fire popping. Mickey fires his shotgun repeatedly into the kitchen before finding out the truth. So, there amidst the ruins of his house, Mickey catches the parrot. But does he strangle the parrot for the hardship? Of course not, Mickey laughs about the whole thing, because that’s who he is, and it’s good to see him featured again.