Now that 1937 has been covered, we move forward into 1938 in a much different landscape for the Walt Disney Company. The proceeds from Snow White begin rolling in, and the company is now flush with cash. A new studio is on the horizon, built especially for the animators. The future of the company is not in doubt, and there are new stars like Snow White, Goofy and Donald Duck.

Donald has had his own cartoons before 1938, but he’s really becoming more a part of the company’s plans. The first short released in 1938 is today’s subject – Self Control. If you can imagine more of a dichotomy between title and character than Donald Duck and Self Control, then you should be writing this blog. 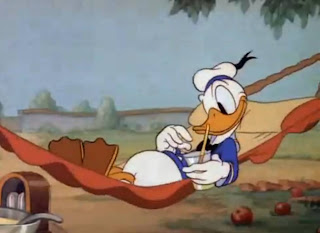 As you would imagine, Donald does not display much Self Control in this short. In fact, quite the opposite. The comedy comes because he is trying to control himself. As he lies in his hammock, the radio on his nearby table begins a self help program, on how to control your anger. Donald decides to accept the challenge. 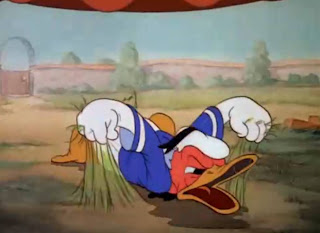 You can imagine how that turns out. Various creatures begin to menace Donald, causing his anger to rise. A fly takes first crack, buzzing by his feet and ending up with Donald flipping his hammock over. Then, we have an inchworm being chased by a hen. Finally, there’s a woodpecker that decides to make Donald’s lemonade into a pool, and peck a tree full of apples so they fall into the hammock. 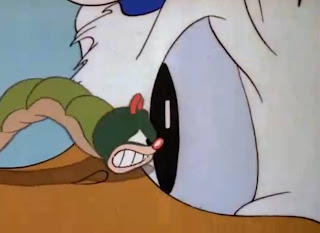 The fun of this short is watching the increasingly bothersome animals/pests and the rising level of anger coming from Donald. There’s not really any doubt that Donald will end up losing control, the question is when it will happen. In the end, he takes a gun to the radio, clobbering the radio rather than shooting it. 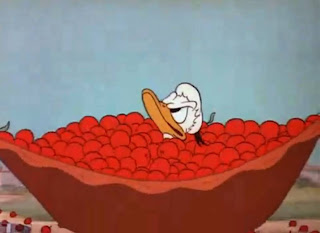 However, I would have to say that the pattern, intended to be a slow burn, ends up being a slow down. The short doesn’t have the vitality or energy of other Donalds, because you know the outcome in advance. The gags are okay, but not as good as something like Modern Inventions. 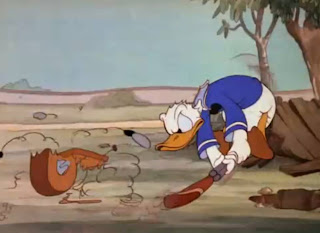 In fact, this short plays a similar tune to Modern Inventions, with Donald getting involved in increasingly irritating situations, waiting for the inevitable blow up. To be fair, that’s a big part of his appeal, so it makes sense, but Self Control comes off a little tired. It’s still enjoyable, but not as good as other Donald Duck shorts we have seen and will see in the future.