It’s very fun for me to watch these shorts and films in order, not only because they are entertaining, but because it follows the track of a man’s life. We saw Mickey evolve from the barnyard mouse worried about getting the girl and playing music all night into a domestic, suburban man. Now, we see Donald evolving from the rambunctious duck to the faithful uncle and leader of young men in Good Scouts.

It’s so familiar for me, because my son just joined Cub Scouts this year, so I have been accompanying him on multiple camping trips and meetings. Donald does the same thing here, leading his nephews into the woods for a scouting campout. As you’d imagine, things don’t go as planned. 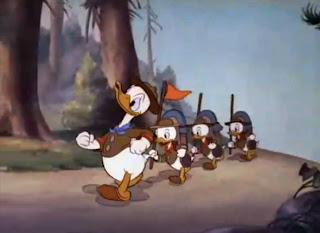 This is a new role for Donald, serving as the leader rather than someone just trying to go about his business and getting interrupted and irritated by others. It is a role that suits him well. After all, he can play the egomaniac who knows how to do everything, and then play off the frustration that ensues when he doesn’t get it right. 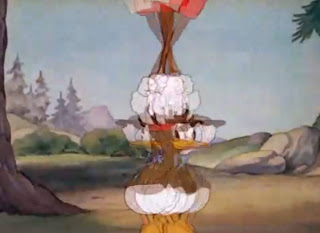 There are several examples of this throughout the short, beginning with the setting up of the camp. Donald makes two huge mistakes. The first is trying to show up one of the boys and chop down a giant tree for firewood. It turns out to be a petrified tree, causing Donald to go through several vibrations similar to Clock Cleaners.

Then, the madness continues as the boys cannot set up the tent to Donald’s liking, so he ropes a giant pine and bends it down to serve as the spine of the tent. You can imagine how that turns out, as Donald jumps on top to celebrate and ends up with the tree breaking free and catapulting him into the woods. 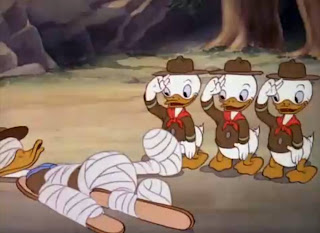 At the end of the short comes something that has been sort of a trend in the most recent Disney shorts. Perhaps longer than that, now that I think about, actually. It’s the building gag that has the final climax. For example, in this short, it’s Donald ending up on Old Reliable the geyser. 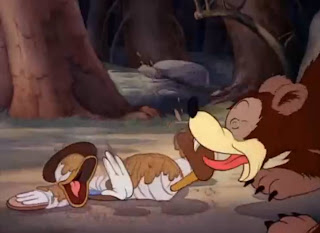 That gag, of Donald erupting into the air, is enough, but it builds and builds from there. The boys try to save him, plugging a tree into the geyser, and it shoots up to hit Donald. The bear that had menaced Donald earlier comes back to swat at him from a cliff. Rocks go into the geyser and end up hitting Donald. The final gag has a boulder being shot into the air, and the short ends with the bear chasing Donald over and over on the boulder. 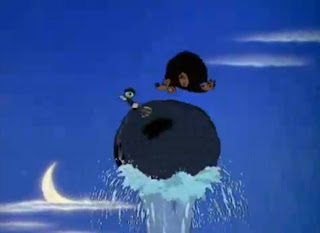 There are so many more gags here, including Donald playing injured by smearing ketchup on himself, the bear attacking after Donald is bandaged up by the boys, and more. Good Scouts is a great example of how Donald is so adaptable, and how the animators can stretch him a little further than they could Mickey. It works beautifully in this instance, and will continue to do so.