Back in 1931, we got to see one take on a fox hunt with a black and white Silly Symphony named The Fox Hunt. Now, the Disney studio has many more characters to play with, so in 1938, they teamed up Donald and Goofy for a short by the same name, that shares many of the same tricks, but with the Donald and Goofy spin.

Like in the previous short, we get to see bloodhounds smelling the ground, a horse throwing its rider off before jumping a bush or fence, and a fox that gets caught only to turn out to be a skunk. The difference is, where the Silly Symphony took half the short showing us the preparations for the hunt, this one jumps right in with Donald leading the bloodhounds. 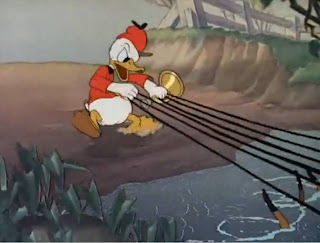 Donald and the hounds is my favorite part of this short. Anyone who has had dogs knows the tendency for them to yank on the leash or try to pull you around. So seeing Donald, with his anger issues, getting worked over by the dogs, and ultimately ending up in a knot with the leashes, the dogs and himself. 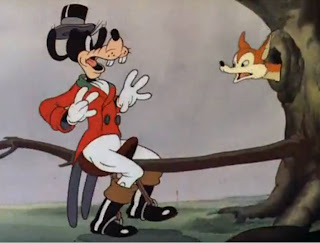 In fact, Donald carries most of the action in this short. Goofy’s part is limited to mostly riding his horse, and the travails that ensue. In fact, his part in this short is very reminiscent of the later Goofy shorts that were “instructional.” All that’s missing is the stuffy narration, and you would have a Goofy short on “How To Ride A Horse.” 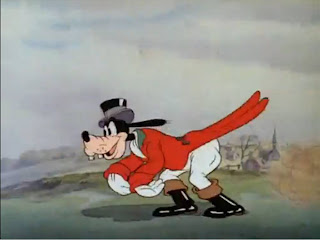 Donald, meanwhile, gets to interact with the dogs as well as the fox. He has some fun interactions with the fox, trying to blow his trumpet to get the fox out of the ground, which ultimately backfires. In fact, most everything that Donald does in this short backfires, like it does most of the time. 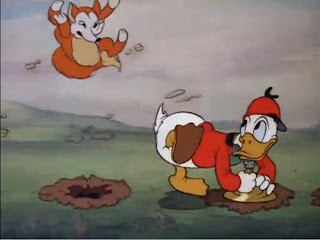 What’s interesting is that this short is billed as a “Donald and Goofy” short, but yet other Disney characters are in it as well, although mostly in shadow/glimpses. At the beginning we see Mickey riding by in shadow along with what looks like Clarabelle Cow. Later, when Donald has found the fox, we see Mickey somewhat obscured on a bridge leading to Donald. 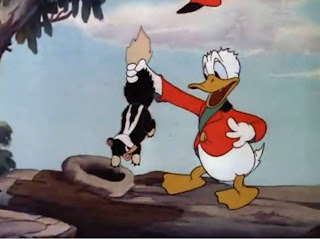 Other than that, the other notable thing about this short is that it looks a bit more complex than previous Donald shorts. Things like Polar Trappers and Donald’s Better Self used more simple backgrounds, but this has many more moving pieces in the backgrounds and detail all around. Could just be me, but that’s what it seemed like.

This was a fun cartoon, nothing that will end up going down in history, but a fun one to watch and a great use of both Donald and Goofy.