Snow White and the Seven Dwarfs

So by now you’re probably wondering, “Is he ever going to review the actual film?” Well, rest easy, because today is the day. The capper to Snow White Week is the review of Walt Disney’s classic, Snow White and the Seven Dwarfs.

What did I think? Obviously, I have seen it before, so I wasn’t coming into this cold. But as I remarked to my wife while watching it, watching all the films leading up to Snow White makes a HUGE difference in your appreciation of the first animated feature. The jump in production value, character design, music, storytelling and more is so evident, that it astounds me that this film came from the same studio as some of the earlier shorts. 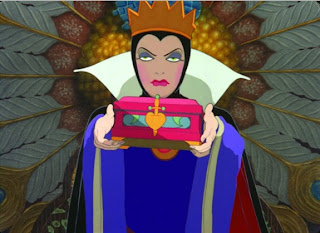 In the past, I had always thought that Snow White was a film full of fluff and padding in the story. I don’t know where that impression came from, but sitting down and watching the film from beginning to end with no interruptions, I was struck by how tight the story was. There is not much if any wasted time in this movie. Everything propels the story forward. Think about the fact that in the first 15-20 minutes of the movie, you find out the relationship between Snow White and the Queen, have Prince Charming and Snow White fall in love, learn the characters of the Queen and Snow White, have her nearly killed by the Huntsman, flee through the forest and end up in the Dwarfs’ cottage. Whew! 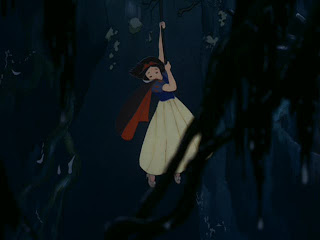 Also, I noticed so many things this time around that I have never seen before. For instance, in the opening shots of Snow White, she is wearing wooden shoes, like a Dutch girl. But isn’t she German? Another thing is the scenes of Snow White in the dwarfs’ cottage during the party scenes. I had never noticed how obvious it was that Snow White was rotoscoped. For those unfamiliar, live action footage of an actress was shot and used as reference for Snow White’s movement, to get the most realistic animation possible. 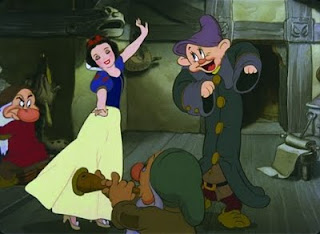 But in the scenes where Snow White is dancing with the dwarfs, it is obvious that she is limited by this, not helped. The dwarfs move in crazy, unrealistic and more fanciful ways, while Snow White is a bit more stiff and unwieldy. It’s not something you would notice the first time through, but after seeing previous human figures in earlier shorts, it was obvious.

That’s one minor complaint, though, because for most of the film, Snow White’s figure is animated perfectly. She seems to glide through the film, in a way that makes perfect sense when paired with her pleasant, airy demeanor. The voice work by Adriana Caselotti is superb, and fits with the character. Not to mention the fabulous work of the voices behind the dwarfs. 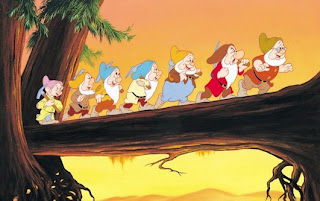 The music is something that gets overlooked in the discussion of how beautiful this film is, but it shouldn’t. A point that gets made multiple times on the Blu Ray extras is that Snow White was the first musical, film or stage, that made the songs part of the story. Plus, think of iconic songs from a musical – how many musicals have as many recognizable songs as Snow White? At first blush, you might think, “Lots of them,” but really think about what you and your kids and siblings know – Snow White has the most iconic songs. 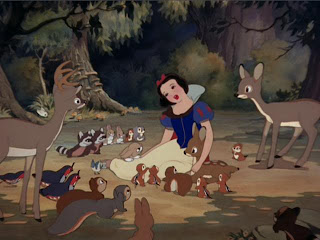 That’s the thing that I really took away from viewing this film. It is iconic. I told my wife while watching that Snow White’s yellow, red and blue dress is as much of an icon as Batman or Spider-Man’s costume, if not more so. This film and its characters are part of the cultural lexicon, in a way that most films, even other Disney films, are not. It’s well deserved, as this is an artistic masterpiece. The leap from the shorts to this film should not have been possible – it’s that dramatic. The fact that it was made and it was done well is a testament to Walt Disney, his animators and the persistence and vision they carried forth. I can’t state how impressed I am by Snow White.