One of the things that I have a love/hate relationship with in film and media is the ever changing landscape and technology. When DVD came out, I loved it, because it meant I could see my favorite films better, but I hated to buy all this new equipment and re-buy my films. Blu Ray was the same thing, although I could justify it somewhat because I ended up with a Playstation 3, which serves as a media server, internet portal, Blu Ray player and gaming platform.

That said, it was still hard for me to plunk down the extra cash and purchase Snow White and the Seven Dwarfs on Blu Ray. After all, this was a film I had purchased at least three other times (twice on VHS and once on DVD). The Platinum Edition DVD was a favorite of mine, with amazing concept galleries, featurettes, etc. Was the update to HD worth it? 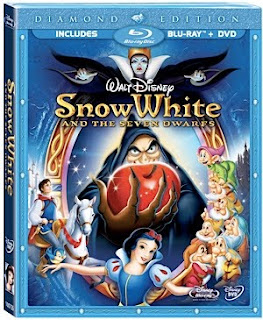 I’d have to say it’s a mixed result when looking just at the film. The film looks beautiful, no doubt. But on a modern television, equipped for high definition and widescreen formatting, it is not the same. Snow White is a 4:3 film, and on a 16:9 screen, it leaves much to be desired. Disney tried to fix this with “Disney View,” a process where they fill the side/top black bars with custom artwork, but that actually makes it worse. So, aside from the film, which is fantastic content as always, what else is there on this set to recommend it to fans of Snow White and the Seven Dwarfs? 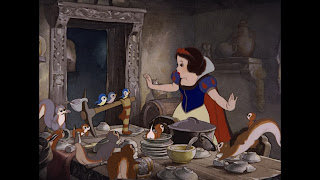 Well, there is the array of typical Disney corporate synergy features, which are predictably hit and miss. A music video of “Someday My Prince Will Come” by Tiffany Thornton misses with me, as does the BD Live connection that allows you to download future Disney trailers off the Internet. The sneak peek at Princess and the Frog is good, if only because it eschews the trailer approach for a description of the film from Ron Clements and John Musker.

But it’s in the archival material that this set really shines. On the main disc, Don Hahn ventures into the Animation Research Library to explore a set of storyboards for “Snow White Returns.” It’s interesting to see that planning was being done for a sequel to Snow White, even if we don’t know for sure what it was – short, feature, etc. This sequence has Hahn narrating the storyboards and mixes in the deleted soup sequence and bed building sequence to create a short presentation of what this sequel would have been like. 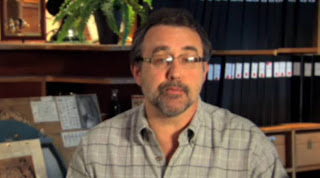 That in itself is great, but the second disc actually offers some wonderful documentaries and other background material. The short film “The Fairest One of All” details the development of the film in a general sense, but the true fun is in the Hyperion Studios tour feature. Here, you navigate through different rooms of the old Hyperion Studio, looking a clips related to those rooms. For example, in the music room, you watch “The Skeleton Dance” and hear director David Hand describe his interaction with Walt and a metronome. 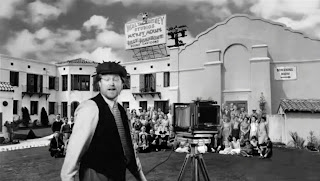 The best part of this feature is the storyboarded presentation of old story meetings. When Hand is telling his story, we see pictures sketched out like storyboards and “animated”. It is enthralling to see Walt in animated form. The worst part of this is the navigation. The features are not organized in a linear fashion, instead, you have to navigate around the room and click on objects to start the clips. Since these objects are in sepia tones and the rest of the room is black and white, the distinction isn’t clear. It’s hard to see all the things you are supposed to click on.

There are other features, such as Blu Ray family games and the audio commentary from John Canemaker that was on the Platinum Edition DVD, which add to the package. All in all, I have to say that buying the Blu Ray was well worth the extra $15. Just the background material alone was worth it, although the picture and sound are quite improved as well.