Ahhh….another milestone, with new characters appearing on the scene in the Disney canon. Makes you smile, doesn’t it?

Donald’s Nephews introduces, well, Donald’s nephews – Huey, Dewey and Louie, who would go on to be very good characters for the company. They debuted in this short on the screen, but around the same time in the Donald Duck comic strip and comic books. The creation of the nephews led to an expansion of the “duck universe” in comics, especially those by Carl Barks. That’s a whole other topic, but one I might get to if all of Barks’ comics are ever collected. (Note to Disney: c’mon! Can you get Boom! or Marvel to take care of this?) 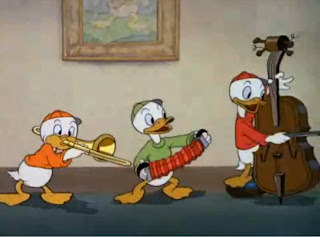 Regardless, the question before us today is whether Donald’s Nephews succeeds as a short. My answer is a resounding yes. It takes these new characters and plays them against Donald, leading to an increase in his frustration, and we all know that’s where Donald is at his best. 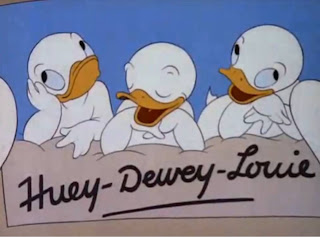 The short opens with Donald reading a postcard from his sister “Dumbella,” which I found very interesting. Does anyone know if Dumbella ever appeared in the shorts or the comics? This was the first I had heard of her. Regardless, the nephews pictured on the postcard are quite different than the ones who come crashing through Donald’s door only moments later.

To try and get a handle on the hooligans, Donald turns to a parenting book. This is when I started laughing. If you’ve ever been a parent, you know the double edged sword of parenting books. The advice they offer is often great in theory, not so much in practice. Donald finds this out in a hurry. 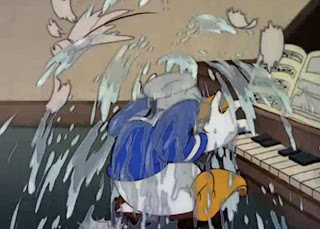 The rest of the short follows a pattern of Donald reading the advice in the book, following it, calming the boys down for a moment, then having it all go horribly wrong again. But saying it’s a pattern isn’t to say it’s predictable or boring. No, it’s hilariously funny, as we see the boys playing music, soaking Donald with a water balloon and feeding him a “Volcano Mustard” pie. The poor book suffers the consequences of Donald’s frustration. 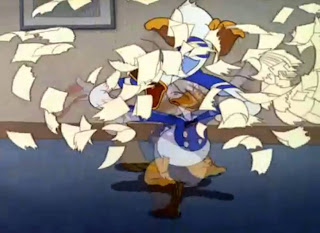 One thing I took away from this short was how domesticated everything was. We have seen how Mickey has moved away from the rural, barnyard setting to more of a home-based life, but now Donald has joined him. Of course, this mirrors the journey of Walt and his team themselves, especially in this post-Snow White era. 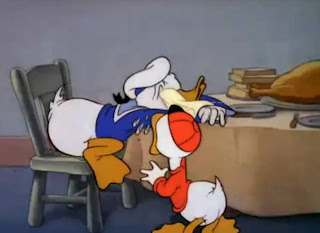 Huey, Dewey and Louie don’t have much character in this short, and as would frequently be the case, they are mostly the same character done three times. Their sole purpose in this short seems to be to irritate Donald. It’s not mean spirited, though, but delivered with a smile. It’s a formula that would be successful again and again in the intervening years.