I’ve mentioned here before that Goofy is my favorite of the Fab Five Disney characters, because of the work he does in later shorts where he’s learning sports or other tasks. The more I see of Donald, though, the more he goes up in my estimation. Again, as I’ve said before, Donald is a reflection of most of us in our lives, and that’s readily apparent in Donald’s Better Self.

This is a deeply psychological cartoon. Sure, it uses a tried and true gag, having Donald split into an angel and a devil, but it’s interesting to see the differences in what each has him do, and how Donald reacts to them. Someone who’s a better amateur psychologist than me could divine the instances of id, ego and superego in this short, but I know enough to know that they are there. 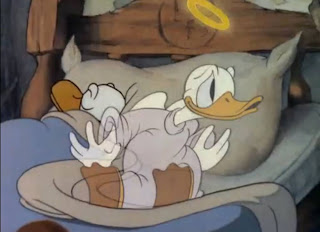 The opening gag features Donald’s alarm going off, then the angel inside him pops up, ready for the day. If you can’t relate to this, you haven’t had to go to work or school. Everyone has that person inside them who wants to go back to sleep, but it’s the angel that gets us up. True to form, Donald’s devil shows up and tries to keep him in bed. It’s an immediately relatable gag that kicks this short off with a bang. 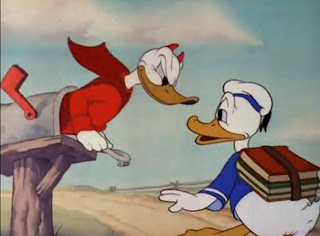 It’s in the next section that things get much more interesting. While the angel gets Donald up and moving, the devil bides its time. Popping out of a mailbox on the way to school, the devil convinces Donald to head to the fishing hole and play hooky. While they’re there, the devil gets Donald to smoke a pipe. 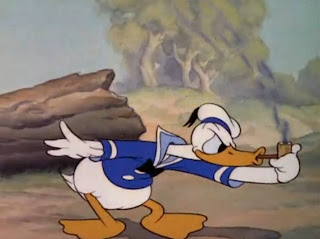 This is the part that is so intriguing to me, because Donald has an extreme averse reaction to the pipe and smoking. It’s not like Walt Disney, an avid smoker, was one to rail against the evils of tobacco. Perhaps for children, but where is Donald in this short? The angel is dragging him to school, so he is a kid, I guess, but later on we will meet his nephews, and if he’s driving and wooing Daisy, I’d see him as an adult. So, why, exactly, was the anti-smoking message in here? 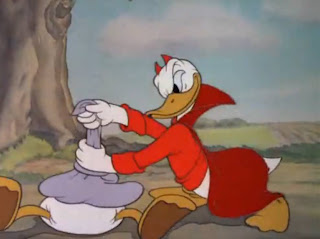 It’s also good to note that Donald’s angel and devil have clear, well spoken voices. There’s something more to that than just the opportunity to give Donald a clear voice. It’s psychological as well, as if Donald hears himself just fine, and doesn’t worry about the nearly unintelligible squawking he usually makes. 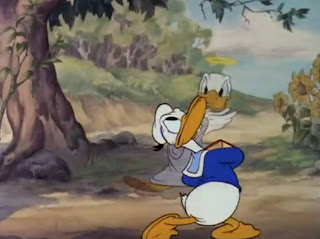 As you’d imagine, everything turns out fine, and Donald is steered to school. But this is probably a very important cartoon in the Donald mythos. I say probably, because it would take someone much more skilled in animation critique and psychology to break it down. The animation style in this is a little more simplistic than in previous shorts, which was an adjustment visually. Does that relate to the psychology? I’m not sure, but it does make Donald’s Better Self a very intriguing short to watch.