Snow White Week has begun! It’s kind of like my version of Shark Week, but with a lot fewer grisly shark bites, and more singing princess action. So you know, the review of the film will come tomorrow, followed by a couple of extra items the following days. But for today, let’s pause a moment and take a look at the development of the film. 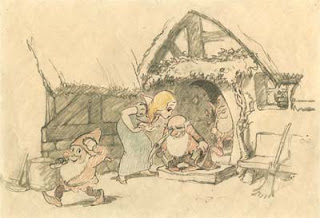 Work on Snow White began in early 1934, over three years before it would be released on December 21, 1937 at the Carthay Circle Theatre in Hollywood. Think back through our reviews for context here. At the time Walt was beginning work on Snow White, the Mickey shorts, such as Two Gun Mickey or Mickey’s Steamroller, were still in black and white, and the Silly Symphonies were in color, playing with things like The Wise Little Hen, where Donald first appeared, or Funny Little Bunnies.

The story of how Walt broke it to the animators that they would be working on a feature is by now legendary. One day, he told the team to head home and have a nice meal, then come back to the studio. At that meeting, Walt proceeded to act out the entire story, bit by bit, detailing exactly how they would make Snow White into a feature film. You can read accounts from the animators of how that went, and they were all enraptured by Walt’s storytelling skills. His time spent with Walt Pfeiffer playing around in grade school was great practice for this sort of stage. 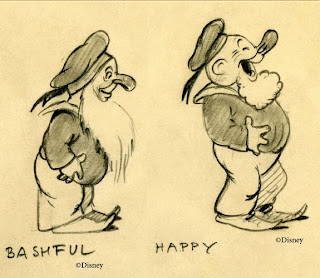 At first, development on the film focused greatly on the gag, hence the need to give the dwarfs funny names. There was a list of over 50 names developed, including classics like Jumpy, Baldy, Shorty or Wheezy. This focus on the dwarfs was what Walt wanted, since they had the most potential for humor. Remember, at the time, people were concerned that no one would sit through a cartoon for that long.

However, once Walt saw the story treatment worked up by some of his top story men, he saw that not only were the dwarfs comedic, but the other characters were more over the top comedies as well. This was in keeping with the tone of the Disney shorts at the time, but it was not what Walt was looking for in the feature. 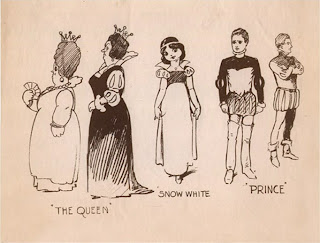 Several concepts were tried for all the different characters. The Queen turned from a fat, batty character into more of a regal, beautiful but evil villain. The Prince became a charming young man, and more attention was paid to Snow White. She was originally a blonde, and it was only over time that she became a more believable and human character. The focus shifted from the dwarfs to the relationship between Snow White and the Queen, leaving sequences like the dwarfs messily eating soup or constructing a bed on the cutting room floor. Both sequences were favorites of Ward Kimball, who took their omission very hard. 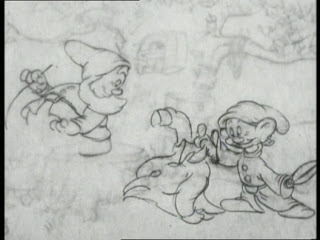 With this new focus moving forward, the team found their stride and began making progress. Walt had the animators doing lots of work studying the human form, which led to experiments like The Goddess of Spring. Music was developed by Frank Churchill and Larry Morey, and things rapidly built to the release of the film. But changes were being made right up until the last minute, only weeks before the premiere. It was a film that took nearly four years to develop, with the odd aspect of dual approaches to characters and time and deliberation being spent on all aspects. To say this is unusual is an understatement. 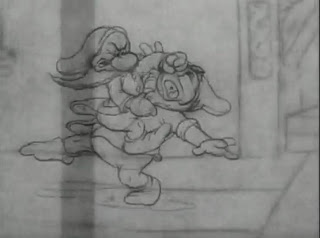 It paid off, as you can see in the finished film the influences of all the things Walt had his team study. It’s just interesting as a backdrop to the shorts we have already viewed to know that development was ongoing for Snow White throughout this period. We’ll share some more stories about development of the film coming up tomorrow and throughout the week, leading up to the review.