We’re back in the Army again, with another wartime short, this time featuring Pluto. Once again, Disney is using its lead characters to promote the wartime efforts, but so far, doing it in a subtle way. Simply inserting Pluto into an Army situation is not the same as later shorts, where we’ll see Donald and others taking a more direct role in the war. 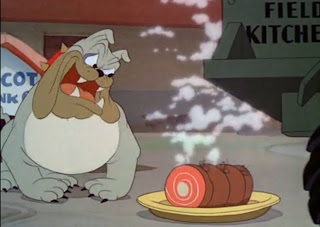 This short all stems from Pluto’s stomach, or more accurately, his desire to fill it. As he is standing outside the fence at an Army base, Pluto sees how the mascots on the base are fed, and gets very jealous. A bulldog gets a ham hock, for example, while a tiny little Chihuahua gets a full steak. Pluto decides that he’d like a piece of that action, and who could blame him?

The theme in this short is a lot like Donald Gets Drafted, that the Army’s not so bad anymore. It’s a subtler message here, without the accompanying song, but the idea is the same. That idea is immediately lampooned of course, in the finest Disney fashion. 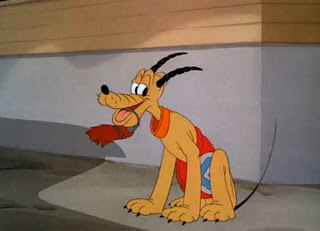 Pluto tries to replace one of the mascots, but the only one he finds is a goat named Gunther. Pluto slides Gunther’s door closed, and steals the drape that goes over him, then twists his ears up into horns to try and look like a goat. This is just the first of the imaginative things Pluto does with his face in this short. It’s the best of the Pluto shorts in that regard.

Needless to say, things don’t work out the way that Pluto expected. Rather than ham or steak, the goat gets old tin cans to eat. Not only that, but when Gunther gets loose, he takes it personally that Pluto tried to edge him out. Gunther takes out his frustrations on Pluto, naturally. 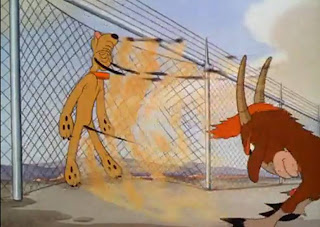 Having messed up his first attempt, the ever valiant Pluto tries again, this time in a tobacco chewing contest with Gunther. The soldiers are so impressed with Gunther’s ability to chew tobacco that Pluto tries to outdo him. That leads to the funniest sequence of the short, after Gunther causes Pluto to swallow the tobacco. 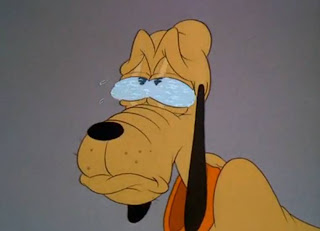 Pluto’s face does all kinds of contortions, his eyes fill with tears, his ears go up and down in unnatural ways, and he starts turning green. Even more, he starts hiccupping and changing colors, from green to polka dot and even plaid. This part of the short is just laugh out loud hilarious.

There’s a nice twist to the end of this one, though. Normally, Pluto gets frustrated in his pursuits, ending up in the wreckage with nothing to show for his efforts. This time, though, Gunther ends up worse for the wear, missing Pluto in a charge and ending up blowing up the explosives warehouse. Gunther ends up smacked into an oncoming airplane, and Pluto gets his food! 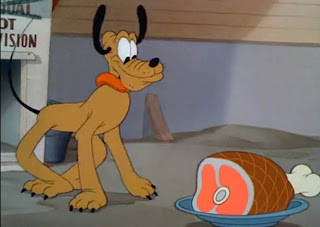 I wonder a little bit if Pluto’s better fate in this short is because of the fact that it’s “supporting” the war effort. After all, you don’t want to show an eager Army volunteer ending up unsatisfied, do you? Whatever the reason, it’s nice to see Pluto get what he wants, even if it’s just this one time.