There’s nothing I love more in doing this blog than running across a cartoon that I have seen a hundred times, and realizing where it falls into the Disney timeline. Knowing that I have seen a short before, and then placing it into context is an amazing feeling. I’m sure that makes me a Disney nerd, but didn’t we know that already?

Donald’s Snowfight is one of those shorts. For years, growing up with Disney Channel (when they showed the shorts and characters), this short was shown around Christmas time. There’s a good reason for that, too – it’s really, really good. This is the short that formed my opinions of Donald and his nephews before I began this project. 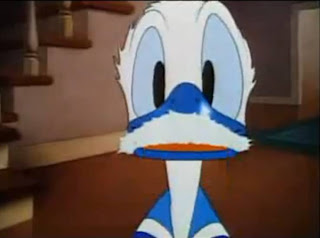 It’s a classic Donald vs. the nephews set up – Donald goes out to enjoy the day of snow, and ends up getting into it with Huey, Dewey and Louie. Donald wears a ridiculous overcoat for the first part of the short which adds greatly to the humor. At one points he even grabs hold of a branch and swings back and forth, like a bell. 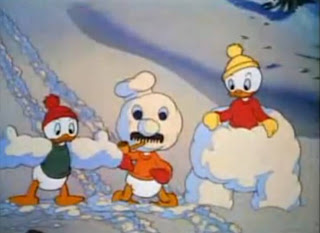 The real fun begins though when Donald speeds downhill to destroy the boys’ snowman. After they painstakingly created the snowman, Donald ruins it, sparking the war between the two. The first shot belongs to the boys, as they create a snowman that has a rock hidden inside. When Donald tries to destroy that one, he and his overcoat end up much worse for the wear. 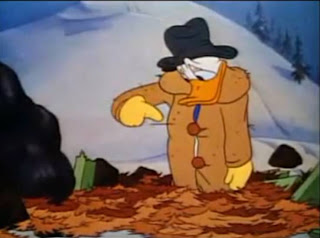 The all out war begins from there, as each side builds an elaborate foothold out of ice. The boys construct a large fort style construct, while Donald builds a boat, laying siege to their fort. The imaginative constructs and use of ice in this short are fantastic.

Donald wins the early rounds of the war, firing snowballs at the boys and knocking them over. At one point, he even “bowls” them over, literally, as the boys turn into bowling pins and Donald gets a strike in knocking them down. But the creativity of Donald’s nephews cannot be underestimated. 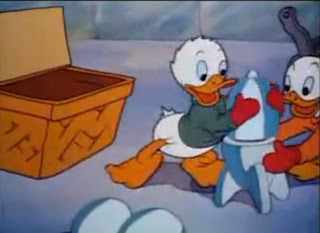 The boys start using two methods to take down Donald – fire and ice. The ice gets built in the form of bombs, which the boys put mouse traps inside. Then they start launching arrows that are on fire. The end result is a melting of Donald’s boat that is absolutely hilarious. 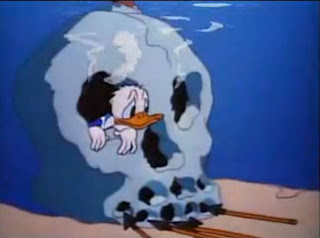 Donald’s Snowfight is a short that I absolutely loved. I loved it before when I saw it at Christmas time and I still loved it today when I watched it again. It is everything you want from a Disney short.