Donald as a farmer was comedy gold in Old Macdonald Duck, so it’s no surprise that Disney chose to come back to that premise again. In the light of World War II, when families were being forced to grow their own produce in “Victory Gardens,” Donald’s Garden was a perfect subject for the time. 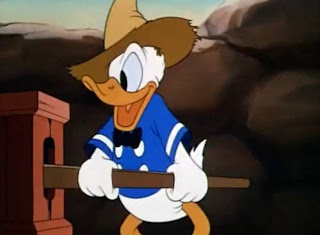 Donald always works best when he’s being frustrated by something that’s not even trying to annoy him. Thus, the first part of this short is a fantastic bit of business, because it is entirely based on that premise. In this case, it’s a water pump and watering bucket that cause the problem. 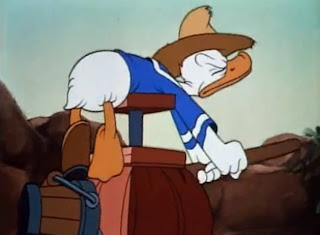 I’m sure many of you reading this have never used a water pump. I have, on my grandmother’s garden. It’s not necessarily a difficult thing, just not as easy as it might look. Donald finds this out when he tries to pump water into the bucket. Through a myriad of attempts, he pumps too hard and the water overshoots the bucket, or no hard enough and the water falls short.

The animation, of course, takes it to extremes, having the water build up inside the pump then drip out, or when it shoots out like a hydrant. As you can guess, Donald’s frustration level rises dramatically each time the water disappears. This is classic Donald stuff and it works very well. 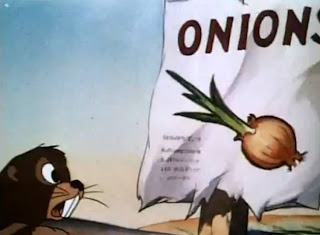 The water bit is used as a transition to the second half of the short, as the water falls into a hole, flooding a gopher. When the gopher pops up from his hole, he blames Donald, and proceeds to set his sights on destroying the garden. This is where the short loses me.

Much like a short that features Pluto but is not necessarily a Pluto short, the gopher takes over, leading the action from that point forward. It would be okay if the gopher were a great character, but he’s honestly a second rate Chip or Dale. 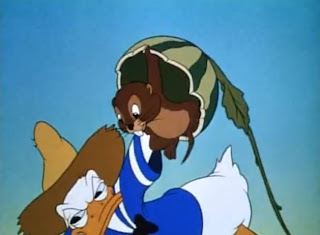 The gopher goes forth and eats up the garden, without Donald in sight most of the way. There’s little conflict or drama in this part of the sort, because no one’s stopping the gopher. When Donald finally realizes what’s going on, it’s too late. He gets knocked over by watermelons cascading into the ground, and then catches on. 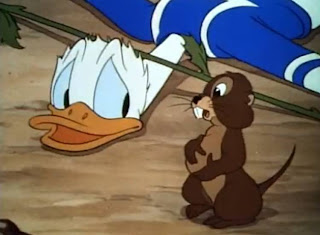 The gopher is too smart for Donald, however, and ties him to the ground with the vines of the watermelon. It’s a really poor ending, because there has been no epic conflict between the gopher and Donald. If Donald got his comeuppance for mistreating the gopher, it would work. However, because the gopher merely took over the short, it doesn’t play very well. All said, I’d give the first half of this short an enthusiastic thumbs up, and the second half a big thumbs down.