The war is over! Okay, not really, but after what seemed like non-stop WWII shorts, we’re back to a regular Donald Duck short with The Village Smithy. It’s a classic Donald formula, where our main duck has to deal with a situation that drive him to distraction. In this case, it’s two situations.

The opening of this short is a great gag, that sets the tone for the comedy to come in the short. We see the blacksmith shop from a distance, and the shadow of a well built, muscular blacksmith on the wall. As the camera zooms in closer, then pans over, it’s revealed that the blacksmith is Donald, who then hammers his own hand. 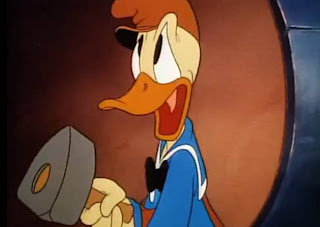 Just that quick sequence at the beginning of the short sums up the entire premise – being a blacksmith is a tough, physical job, and Donald might not be up for it. That is borne out when Donald attempts the first task, to fix the rim of a wheel. It’s very difficult for him, to say the least. 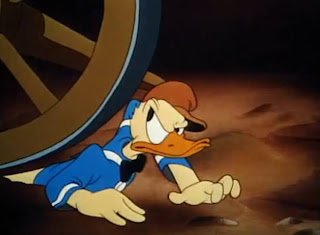 This sequence calls back to the part of Clock Cleaners where Donald was fighting with the springs in the clock. It’s very similar, because here it’s the rim of the wheel, which bends and springs up after him. That said, it’s not quite as funny as Clock Cleaners, because the rim doesn’t “talk” to Donald the way the spring did. 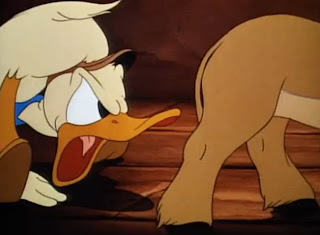 Where this short kicks into high gear is when Donald has to try and put a shoe on Jenny, the stubborn mule. Although Jenny comes off as cute, she is definitely a handful, refusing to let Donald near her. The funny part is the contortions that Donald has to try and go through to get to Jenny. He bends over between his legs, uses stools, steam and more to try and get to her. 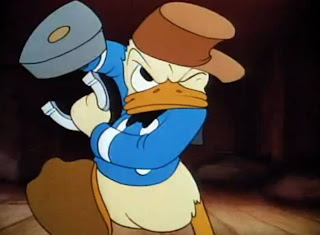 The fun is not so much Jenny as it is what Donald is doing. He gets frustrated, like always, but never quite to the stomping mad level he has displayed in the past. It’s interesting, because we’ve seen Donald at his absolute worst, and this is a more measured duck. 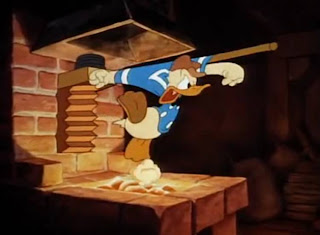 The Village Smithy would not make my top ten of Donald Duck shorts, but it’s a very entertaining one, nonetheless. By having Donald juxtaposed with such a heavy, manual labor job, the comedy comes naturally.