It’s very interesting to see a lot of the classic style cartoons in early 1942, knowing all that was going on behind the scenes at the time. Disney was moving more and more into World War II shorts, was working on completing the Good Neighbor shorts and finishing up Bambi. Perhaps it should be no surprise that the studio was churning out some familiar subjects like Pluto shorts. 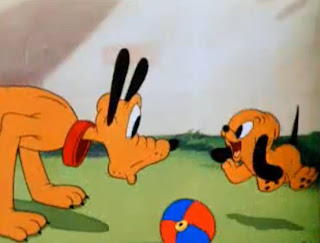 Pluto, Junior is the first Pluto short in a while, and it follows the similar formula, with a twist. The formula is a dog getting into all sorts of fun and interesting situations around the house, without dialogue. The twist is that the dog is Pluto’s son, not Pluto himself. That casts Pluto in a secondary role for one of the first times. 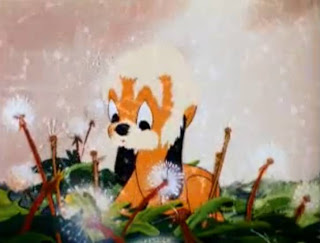 Pluto’s role in this short is more of a foil for his son. When the little pup wakes up, he keeps Pluto from sleeping by doing all sorts of crazy things, interacting with his environment and getting into trouble, just like his father was famous for doing. 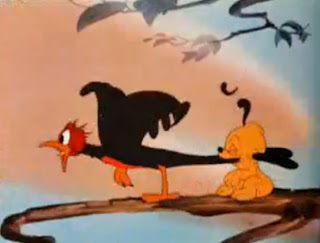 It’s an interesting idea, but I have to say that Pluto’s son is not the most compelling character. He is just a little version of Pluto, which makes him less than unique. That’s not to say that there isn’t some funny stuff in this short, it’s just not that original. 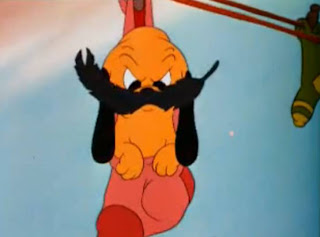 Pluto, Jr gets into things right away, as his father is blowing a ball back and forth with his snores. Junior gets the ball and ends up getting it stuck in his dad’s mouth. Then, he finds a balloon that ends up in Pluto’s mouth, before Junior pops it.

The most interesting part of the short, though, comes when Junior ends up chasing a worm up a tree. He starts chasing a bird, which ends badly as he gets stuck in a sock on a clothesline up in the air. This leads to Pluto trying to come and rescue his boy, providing some of the funniest stuff in the short.

Pluto tries to balance on the two clotheslines, wraps his tail around one to stay up, and tries to make his way to his little boy. It’s the kind of thing we’ve come to expect from Pluto, and it’s quite good. The end sees them both fall of course, ending up in a bath tub. 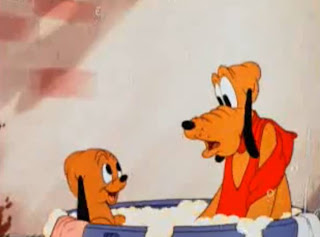 It’s the end to a funny bit, but the short as a whole falls a bit flat. It really just seems like an attempt to create a foil for Pluto, but as usual, he ends up stealing the show.

All images copyright Disney. All rights reserved.
Posted by Ryan at 2:45 PM