World War II was becoming more and more a part of American life in 1942, after the devastating attack on Pearl Harbor. The Disney studio became part of that effort, turning out shorts that dealt with war stories and themes. The first of those in their regular release pattern (outside the Canadian shorts) is Donald Gets Drafted.

The fantastic thing about this short is that Disney is not using it as propaganda, although it’s clear that is what it’s “supposed” to be. You would imagine a propaganda short would glamorize the Army lifestyle and show people the great things about joining the Army. 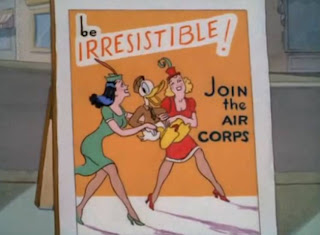 That’s not the case here, although Donald thinks so at the beginning. All sorts of posters line the streets, encouraging him to join the Armed Forces. Donald even inserts himself into one poster, thinking that he would be the one between two fine looking maidens. Donald quickly gets the idea that he wants to be a pilot. 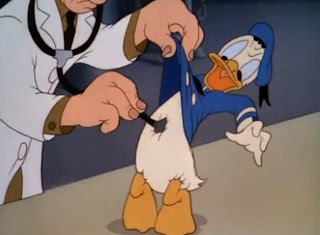 His experiences in the enlistment office, though, are quite different. Despite his stated preference, the doctors and draft board officials poke and prod him, in some of the funniest scenes ever featuring Donald. I loved watching him get thrown around the office and eventually being thrown into the worst fitting uniform ever. 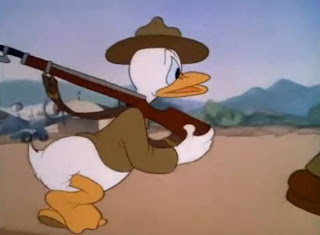 I have to mention the music, too. Throughout the short, there is a constant song “The Army’s Not The Army Anymore” that extols the virtues of the “modern” Army. The song mentions over and over again how things are different and that people aren’t yelling and screaming at you. As you can imagine, this serves very much as the counterpoint to what is happening in the short, just like the narration in the Goofy “How To” series. 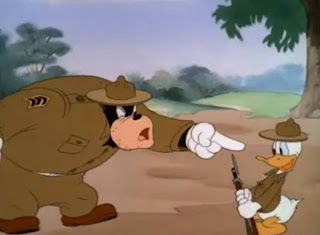 Donald’s drill instructor turns out to be none other than Pete, Mickey’s old nemesis. You can imagine how that will turn out. Donald’s desire to go and fly interferes with his compliance with orders, with predictable results. 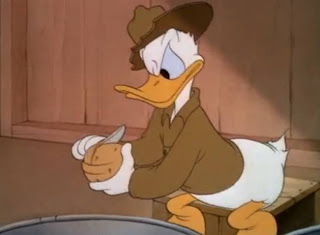 You see what I mean about not glamorizing Army life? It’s a clever approach, because the viewer can blame Donald for making mistakes, rather than assuming the Army is to blame. That makes Donald Gets Drafted a very effective way to promote the war effort without straying too far from what made Disney so special.