The Art of Self Defense

1941 is coming to a close here on the blog, but we have one of my favorite shorts to cap the year – The Art of Self Defense. Again, it’s one of the Goofy “How To” shorts, but this one has a twist – multiple Goofs! 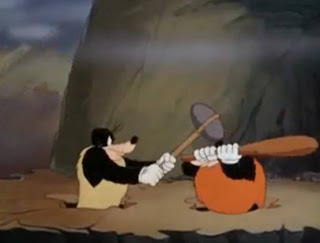 Yes, multiple versions of Goofy. Going forward, the Goofy shorts will use multiple versions of the Goof as a sort of “everyman,” filling all positions on a baseball team or a hockey team. But it started here, in The Art of Self Defense. It’s not something you would think that Disney would originally do. Keeping Goofy unique would seem to be a more prudent way to go. 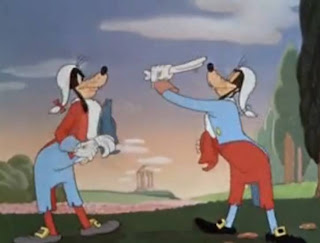 However, it works beautifully in this short to have two Goofys fighting each other. We get to see cavemen, knights in armor and aristocrats all sparring, but with each as Goofy. It keeps you from rooting for one or the other, and allows you to focus more fully on what they are doing, and what the narration says. That makes the short a lot better in the end. 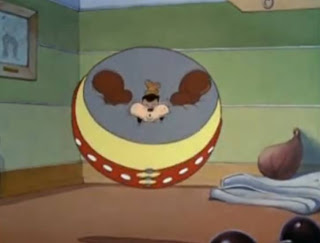 Another great device used here is having Goofy serve as a bridge between eras. When we move from one time period to the next, such as from cavemen to knights, we see Goofy riding some mode of transportation in the clouds. These are some of the funniest shots in the short. Seeing the Goofy angel ride a chariot through the stars is downright hilarious. 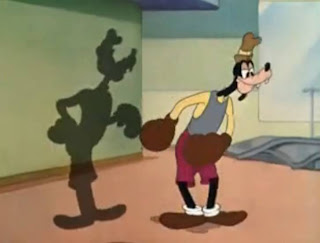 That’s only the first half of this fantastic short, though. The second half takes place in the confines of a gym, where Goofy is contending with the omnipresent narrator in demonstrating how to fight. It’s a conceit that was used before, but here, we see some of the direct interaction between Goofy and the narrator. The narrator tells Goofy to inhale, and when he forgets to tell the Goof to exhale, Goofy blows up like a balloon. That sort of interaction is a new twist to this relationship. 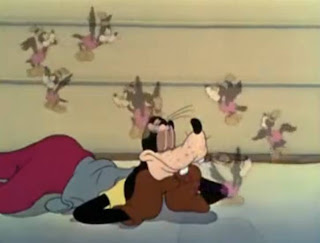 The laugh out loud part of the short, at least to me, is when Goofy begins “shadow boxing.” His shadow literally comes to life, stepping off the wall at the urging of the narrator, and starts fighting Goofy. We see a bunch of different ways that the shadow is winning the fight, from fast paced punches to slow motion breakdowns of how the punches land. I could not stop laughing during this sequence.

The Art of Self Defense is probably the perfect “How To” short in my eyes, because it combines the idea of Goofy as everyman with some individual time spent with the character. It’s a great balance between spreading the wealth and reserving some of the individuality of the Goof.