The Canadian war bonds films roll on today, with the third in the series, Donald’s Decision. It’s the first film that has featured one of the Fab Five in this sort of propaganda, and as such, it’s probably the best of the four Canadian films. 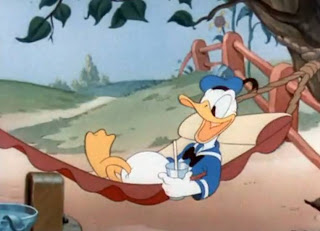 Even though this film, like the others, uses animation from previous shorts, a better attempt has been made to craft a story for this short, rather than just copying earlier bits. Sure, the storyline is somewhat derivative of the shorts it is pulled from, but it still makes sense on its own. 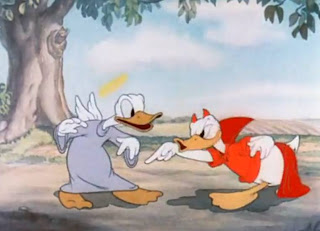 Pulling from Self Control and Donald’s Better Self, this short merges parts of each to create a slightly different story. The beginning of the short comes straight from Self Control, with the radio telling Donald what he should do. In Self Control, it was how to keep his anger in check, whereas here it is to buy war savings bonds.

From there, we go into Donald’s Better Self. If you recall that short, it is one that featured an angel and devil talking Donald into attending or skipping school, respectively. This time, the issue is…you guessed it, war bonds. 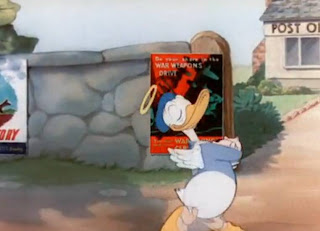 There are some fun twists, though. The devil is presented as a Nazi, since he pops out of a mailbox whose flag spins around to form a swastika. And, just like in the original short, the angel divebombs the devil, but it takes on more meaning in a “war” environment. 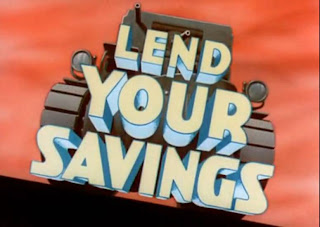 Of the four Canadian war shorts, this one is the most entertaining by far. It shows us the true conflicted feelings people had when looking at the war, between saving money for themselves or “donating” it to the war effort. That issue is the exact reason these shorts were commissioned, and this one does the best job of them in communicating that conflict.