Donald is just the type of person you would imagine is always looking for ways to get rich. Therefore, it was not surprising to me to see Donald’s Goldmine, in which Donald tries to find gold. Donald does his best to be a great miner, but as in everything else he does, it does not turn out as planned. 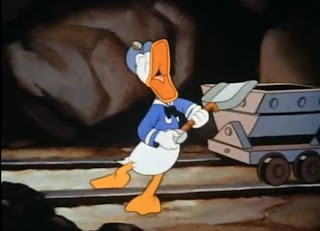 This is a little bit of an understated Donald. We don’t get to see him jumping up and down and going on a rant like you normally would. This seems to be a more restrained Donald, which is somewhat odd, but intriguing, too. Throughout his travails in this short, he seems to be more focused on survival than trying to get revenge or getting his way. 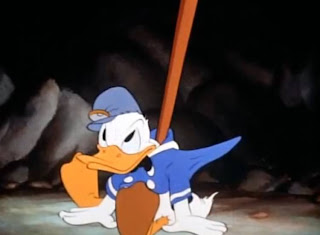 The first thing that Donald faces in this short is simply trying to get around with all his tools. After shoveling coal, he ends up swallowing some, he gets stuck in his pick axe and is an all around mess. For some reason it stuck out to me in this short that Donald is merely annoyed or irritated by what’s going on, and not his normal hopping mad self.

The pick segment is kind of disappointing, because of that. The pick gets stuck in his clothes, and turns Donald into all sorts of contortions trying to get out. While the various twists and turns he takes are pretty funny, I kept waiting for Donald to start screaming and yelling, but it didn’t happen. 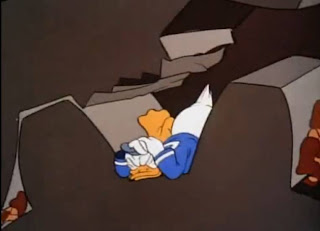 The counterpoint to Donald in this short is actually a donkey. The donkey isn’t named in the short and serves as the voice of the audience, to laugh at Donald when he gets in these predicaments. It’s not something I recall seeing before with Donald. We had the horse laughing at Goofy in How To Ride A Horse, but using the concept in a Donald short is a little different.

After all of those mishaps, you’d think Donald would not be able to find gold, but he does. In good Donald fashion, though, that only causes more problems, as he gets dumped in to the ore wagon and put through the conveyor belt, facing dangers along the way. 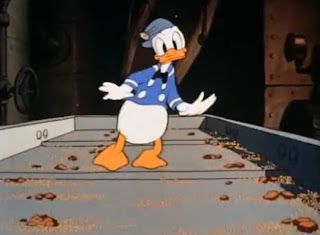 This part of the short was almost like an adventure movie, with Donald dodging impending doom over and over again. He nearly gets ground into gears, pounded flat on the conveyor belt and shaken to pieces. While it’s great animation and fun to watch, it just doesn’t seem like Donald.

Goofy would have been a better fit to this short, in my opinion. At this point in time he was really only doing the “How To” shorts, but this would have been a great fit for the Goof. Not to say that Donald isn’t good, but the whole short doesn’t fit his character too well. Still, it’s a good short with some interesting bits.