Last Thursday night, some friends and fans alike sat down to watch Bambi together, in the first ever Tweetwatch on the Disney Film Project. We joined together in the DFP Friendfeed room, over Twitter via the use of the hashtag #BambiDFP, and watched one of the classic Walt Disney animated films.

What did we think? If I can offer my opinion first (it is my blog, after all), most animation historians consider Disney’s first Golden Age of Animation to consist of Snow White, Pinocchio and Fantasia. I would submit that those people have no heart, because Bambi is one of the most beautiful, moving and textured films I have ever seen. 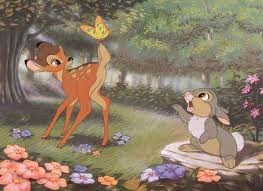 “Man this sort of animated movie is such a lost art, so pretty, and nothing like it anymore.”
Todd Perlmutter

He’s absolutely right. A movie that has such detailed and intricate backgrounds could never be made today. There is a depth of field and a realism to the animation that would be impossible to achieve in today’s short turnaround and quick deadline world.

“I think I would've watched this film a lot sooner if I'd actually known the animation was this gorgeous.”
Alison D

The backgrounds by Tyrus Wong were the first thing I noticed, probably because the book by Frank and Ollie called so much attention to them. They do such a good job of giving the impression of a rich forest while also giving off the proper mood. I was incredibly impressed. 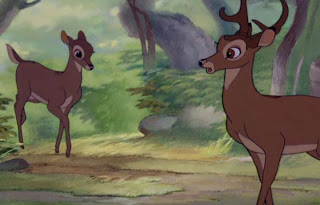 “Notice the drastic difference from how he greets Faline and how Simba greets Nala. Boy, the world has changed.”
Lori Abramson

Lori brought up a good point. The innocence and heartfelt nature of all the characters comes through almost immediately in Bambi. In current films, there’s more of an edge, and while the animation is very top notch, it doesn’t convey the same emotions as you see here. The story of Bambi in the original novel is a harsh portrait of the cruelty of nature, but this film is about the journey to adulthood, and infuses charm along the way.

The entire film is a classic, but really, the way it manipulates emotions and plays on your expectations is fantastic. Throughout the viewing of the film, I kept getting tweets from people asking if “it” was coming or if it had happened. The “it” of course, was the death of Bambi’s mother. When I heard the music play, a chill went through my heart. That music was on an old cassette and book set I had, and hearing it again was so powerful. 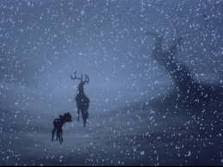 If there’s any drawback to Bambi, it’s that the film is so short, it doesn’t really provide deep insights into the characters. Modern films like Beauty and the Beast give us a penetrating look at the main characters. However, I don’t know that that would have worked in this film. In the end, what we’re left with is a quick snapshot of the life cycle of a deer in the forest, and it’s an amazing view into that world.
Next up for our Tweetwatch is Saludos Amigos, so if you want your thoughts in the next review, get all the details and join us next Wednesday, September 9 at 9 p.m.!
All images copyright Disney. All rights reserved.