I have been remiss, and none of you have called me out on it. There were a couple of wartime shorts that I missed, from early in the year of 1942. After reading through the information on Saludos Amigos, I unearthed my mistake and aim to correct it, beginning today with The New Spirit.

In January of 1942, the Disney Studio was primarily engaged in the efforts of the US government to help with the war effort. There were regular films being churned out, but from the Good Neighbor project that would consume a great deal of time to the propaganda shorts and later feature projects, Disney would become a wartime factory. 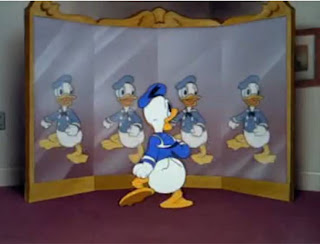 In that sense, it’s kind of amusing to watch The New Spirit, as its themes could be seen as prophetic for the studio as a whole in the coming years. The short is primarily about encouraging the patriotic Americans who wanted to contribute to the war effort to pay their taxes. To do this, Disney used their most relevant spokesperson at the time – Donald Duck. 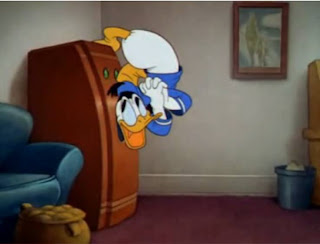 This choice works like a charm, because of all the Disney characters, Donald is the most likely to try and withhold his income tax, when you think about it. During the short, Donald gets all fired up by the voice on the radio urging him to do his patriotic duty. It’s a trick used before in Donald shorts, such as Donald’s Better Self, to make it seem like the radio is talking directly to him.

Donald’s enthusiasm reaches a fever pitch until he’s told that his duty is to pay his income taxes. At that point he loses interest pretty quickly, only to regain it twice as fast. Remember, the point of this short is to get others interested in doing their taxes, so it doesn’t serve any purpose to have Donald hold out too long. 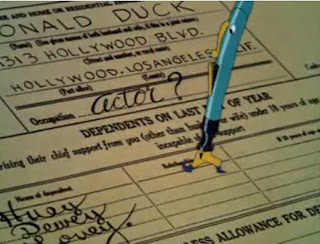 From there, the short goes somewhat surreal, as a talking inkwell, account book and pen help Donald fill out his tax form. We even get to see Donald look up his income on a tax bracket document. That is almost normal, though, compared to the next thing that happens. 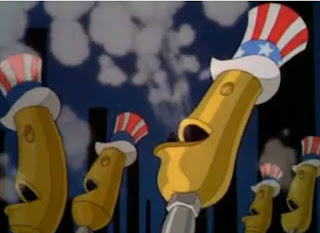 After Donald sprints across the country to Washington to submit his tax check, the short moves into direct propaganda, showing how taxes help to build the war machine. Taxes help build guns, guns and more guns, battle ships, airplanes and much, much more. The imagery is brutal – shots of sinking Japanese ships, burned Nazi aircraft, and tanks and guns marching over the horizon to a rising American theme. 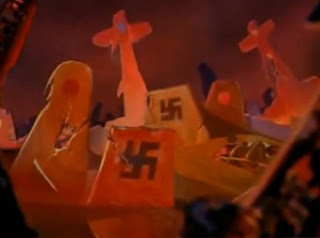 Being wartime, this is not surprising, but it is somewhat strange outside of that context. You would never see a cartoon today with imagery of Al Qaeda hideouts being burned or shot. At least not a cartoon that didn’t air on HBO. It shows how powerful the Disney cartoons were, not for kids, but for adults. It also shows that there is a stark difference in how the nation handled Pearl Harbor and how it handled 9/11. Politics aside, there is an interesting dynamic at play there.