Saludos Amigos had quite a different road to the screen than any other Disney film of the 1930s or 1940s. This wasn’t a film that Walt intended to make, nor one that he set his mind to making on his own. It is, however, an interesting story, and shows how dependent the studio was on outside help during the World War II era. 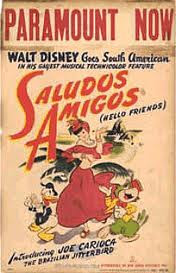 We spoke briefly during the reviews for 1941 films about the turmoil at the studio during that year. Between the war breaking out in Europe drying up the lucrative foreign markets, the disappointing box office of Pinocchio and then Fantasia, and the labor strife at the studio, things were very difficult at Walt Disney Studios.

In that sense, the offer from the US government to use Disney as a goodwill ambassador to South America could not have come at a better time. Worried about the Axis powers gaining a foothold among the populace in South and Central America, the government had come up with a committee to put in place a “Good Neighbor” program, where prominent Americans would visit the South American countries and spread the word of how good the United States was to these countries.

There had been several failed attempts at this, until Walt Disney, that is. Walt’s trip to South America took several weeks, and involved some of his most prominent artists – Norm Ferguson, Mary Blair and many others were along for the ride. Mary Blair’s distinctive style began to come to fruition on the trip, and Walt and his team got loads of ideas for short features to be produced about the various regions they traveled to on the trip.

Notice that? Short features. The idea was for Walt and his team to produce several small features to be shown throughout South America, each focusing on something fun or educational from a different country. Once they began putting the actual shorts, together, however, they discovered that it would make a lot more sense to package them together.

At that point, the film that would be Saludos Amigos became more about the trip that Walt and his artists had made, with the animated segments becoming just a part of the overall tapestry. The funny thing is, despite having shot reel upon reel of footage in the field during the trip, Walt was not satisfied with using that footage for the film. 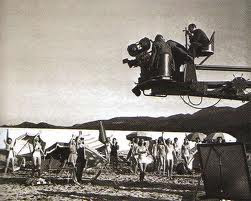 Instead, Walt had actors as well as members of the traveling group stage the connective footage on Disney soundstages. It was the start of a long tradition of Disney “faking” the truth to build connectivity. This sort of thing continued in the True Life Adventures series, and was even taking place in things like The Reluctant Dragon.

In the end, Saludos Amigos featured four distinct animated segments, and was premiered in South America on August 24, 1942. It became a sensation, and eventually made its way to American audiences as well. Tomorrow, we’ll discuss the film, after tonight’s Tweetwatch!